Why Do Singers Wear Earpieces During Concerts? 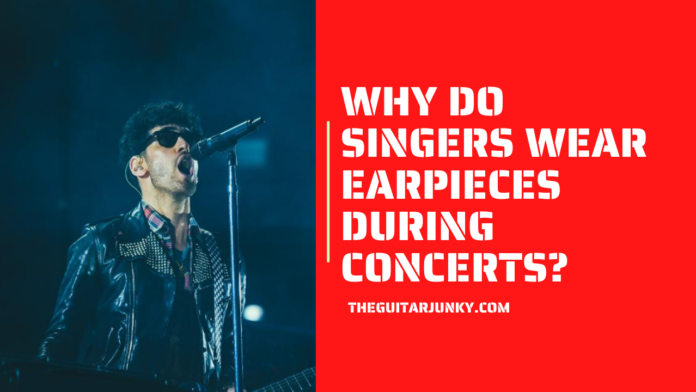 One of many singers’ dreams is singing live and interacting with fans who love their songs, whether in a concert or a festival setting.

Once the singer has that dream achieved, they will soon find out the secrets of the trade, and one of them is the use of In-Ear Monitors or Earpieces that will not only protect them but also enhance their performance.

In this article, you will know all about those earpieces you see your favorite singers have, especially when their singing live in front of an audience.

Earpieces are also known as In-Ear Monitors, are specialized devices used by singers and other musicians during concerts and live sessions in order to hear themselves during a performance.

These are the pieces or pairs of high-tech earbuds connected to a walkie-talkie-looking box attached to their back, whether on a belt or their costumes.

Before the use of earpieces, especially during the 1960s, bands started to turn excess speakers towards them to hear their playing better.

This method poses a problem, in the long run, especially to musicians’ hearing health.

Because of the loud sounds blasting from industrial speakers, musicians are prone to hearing loss.

Recent studies have backed this claim by finding out that they are four times more likely to develop noise-induced hearing loss than regular people and are 57% prone to developing tinnitus because of their job.

Luckily, with the advent of technology, in-ear monitors or earpieces were developed to remedy this problem.

What do they hear when they wear earpieces?

To put it simply, musicians use in-ear monitors or earpieces to hear themselves better as they play, whether it be a live performance or recording their album in a recording studio.

In-ear monitors pick up the sound system for the venue and transmit them wirelessly directly in the musicians’ ears at a safe sound volume, so they can hear how the performance sounds against other instruments in the band and amidst the crowd’s cheer.

This earpiece will let them know whether they are off the pitch or flat and make them aware of their sound for the instrumentalists.

Benefits of Earpieces for Musicians

One of the most vital aspects of utilizing in-ear monitors or earpieces is that it will protect and lessen hearing problems a musician will have in the future.

Musicians can even have extra protection by acquiring custom-fitted molded shells that will provide more sound isolation and noise-canceling properties.

Modern In-Ear Monitors also provide superior sound quality that will have fewer live audio problems from the source and make the audiences enjoy the live performance.

In-ear monitors also do not interfere with your sound mixes and will also give you clearer sound onstage.

Compared to the past, where musicians used over 45 pounds wedge when touring and performing live, the advent of EIMs made traveling from one gig to the next and setting up for stage performances more accessible and very much more manageable.

In-ear monitors and earpieces eliminated space that the band could use to move around on the stage.

Usually, musicians are only allowed to move in specific small spots to be able to receive signals and hear what they are trying to say, but with the earpiece, it is possible for maximum movability even when crowd surfing.

This aspect of in-ear monitors and earpieces is great for singers who are also known to perform and dance around on stage.

This feedback is characterized by the loud shrieking whine sound from the microphone to the speakers that make us recoil and cover our ears.

Earpieces help in this scenario by blocking the feedback noise in your eyes and thus breaking the loop.

Being unable to hear themselves against the loud riffs of guitar or the intense banging of the drum can make the singer push their voices to the limit and thus can cause damage to their vocal cords.

Utilizing in-ear monitors and earpieces will help with this problem by allowing the singers to hear themselves against the accompaniment and the crowd.

Aside from the singers’ vocals, instrumentalists can also hear their playing and make problems in their own instrument and delay pretty much nonexistent.

Probably the most personal thing for a singer to have during live performances is still being able to have direct control over what they want the audience to hear.

Being able to control the volume on each earpiece or even choosing the mix if they have that option in their in-ear monitor will empower the singer and other band members, keep the show running smoothly, and keep the crowd jamming and jumping. 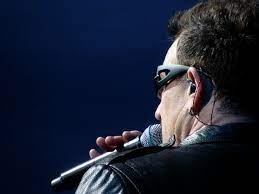 Are there any disadvantages to wearing earpieces?

One main bad attribute of an in-ear monitor or an earpiece is sometimes singers can feel detached from their audiences.

Because of the noise-canceling feature of the earpiece, singers can sometimes not hear the crowd’s excitement and will result in the singer taking off their earpieces which are sometimes seen and will get the crowds wild.

Fortunately, this can be remedied by having a microphone be set up facing the audience; although it can be an added layer of sound on your earpiece, it could fix this problem.

Problems in stage performance can be unpredictable; even with soundchecks done beforehand, technical difficulties are unavoidable.

Earpieces have a lot of benefits, but there are also drawbacks when things go wrong with either the mix or any other interference and will again result in the singer or other band members taking them off in the middle of the set.

Earpieces are essential in the long run, especially for any singer’s hearing health.

There are drawbacks, but all in all, the benefits outweigh them.