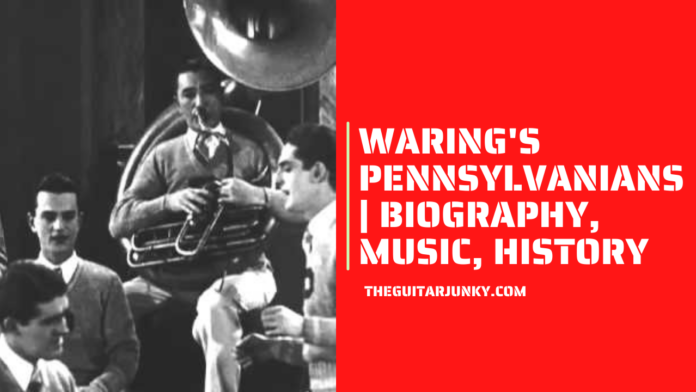 Waring’s Pennsylvanians have entertained the USA for a total of 69 years. This dance band was brainstormed by brothers Fred and Tom Waring and their friends Poley McClintock and Freddy Buck back at Pennsylvania State University in 1918.

When they were starting, they were the Waring-McClintock Snap Orchestra and later “Waring’s Banjo Orchestra.” The name Waring’s Pennsylvanians only came to be in 1922.

The band prided themselves in their unique sound, which was an artful blend of jazz and band music. Waring’s Pennsylvanians first got their big break in 1923 with their song, “Sleep.” This record served as a foundation for the band’s looming popularity in the later years.

At this time, the band had regular gigs at colleges and were often invited at proms, fraternity parties, and local dances. Later, the band branched out to playing at vaudeville houses and movie theatres as their popularity skyrocketed.

In 1925, Waring’s Pennsylvanians finally cemented their place in the industry with their song, “Collegiate.” This song remains their best song to date. Other notable songs in this era include “I’ve Never Seen a Straight Banana” and “I Wonder How I Look When I’m Asleep.”

By 1920s’ end, this dance band grew into one of the sought-after musical acts. The Pennsylvanians even had a brief stint in acting as they starred in the sound film, “Syncopation” in 1929.

Waring’s Pennsylvanians grew more popular in the advent of the radio. In the 1930s, they ventured into hosting radio shows sponsored by big names such as Ford, Old Gold, Chesterfield, and General Electric. Fred Waring even developed his kitchen appliance, the Waring Blender.

The Pennsylvanians briefly stopped making music in 1932 as they thought they were affecting their radio show’s popularity. However, they went back into playing and creating music in 1942.

At this point, Waring’s Pennsylvanians once again soared into popularity for being the first band to have its weekly television show. They also had the opportunity to perform on Broadway and at the World’s Fair.

The band’s music gradually changed as they grew up and later became more of a choral group than their original Jazz roots. It was already during this point that the band ventured into other pursuits such as real estate, magazines, and workshops.

Nonetheless, Waring’s Pennsylvanians remained active and popular up until Fred Waring died in 1984.

The Waring brothers, Fred and Tom, and their friends, Fredy Buck and Poley McClintock were the founders for a dance band, eventually known as the Waring’s Pennsylvanians.

Fred Waring was the man behind the vocals and the ukulele and often played the band’s director’s role. Tom Waring, on the other hand, also provided vocals and the piano. Fredy Buck commandeered the banjo while Poley McClintock also did vocals and the drums and provided the frog voice.

However, as the band grew in popularity, it also did in size. At the latest, the Pennsylvanians had about 40 members. Here are the new members:

The Man Behind It All: Fred Warring

Fredrick Malcolm Waring was born on June 9, 1900, in Tyrone, Pennsylvania, to Frank Waring and Jesse Calderwood.

His family had a strong background in music. At 5, he had his first stage appearance, and at 12, he became the Boy Scout Fife and Drum Corps leader.

As a teen, he and his brother Tom and their two good friends, Fredy Buck and Poley McClintock, formed a band and played at the local dances, proms, and fraternity parties.

He attended Penn State University to study architectural engineering. Fred often tried out for the Penn State Glee Club, but he was always rejected in the auditions.

When the band slowly became famous, he decided to quit college to focus solely on music. His efforts paid off, and the Waring Pennsylvanians became what it is today.

As the Pennsylvanians began to mellow down, Fred organized the Fred Waring Choral Workshop in the Old Castle Inn in Delaware Water Gap. Because of his teaching style, these workshops steadily grew popular. Fred himself taught and supervised these workshops for 37 years until his death.

Fred Waring was also known as a comic strip and cartoon collector. He often invited the National Cartoonists Society at the Shawnee Inn to draw comics and cartoons for him. Soon, it became an annual tradition with the group meeting every June for the next 25 years. Because of this, Waring had a vast collection of artworks dedicated to him.

Fred waring died at age 84 on July 29, 1984, to a stroke in State College, Pennsylvania. The unfortunate event happened after he videotaped a concert with his ensemble at his annual summer choral workshop.

During his lifetime, Fred Waring was awarded the Congressional Gold Medal. In 1997, a Golden Palm Star on the Palm Springs Walk of Stars was dedicated to his honor.

Waring’s Pennsylvanians released 76 albums, 248 singles and eps, and 19 compilations during their long reign.

“Sleep,” “Laugh, Clown, Laugh!” “Little White Lies,” “Memory Lane,” and “I Found a Million Dollar Baby (In a Five-and-Ten-Cent Store)” are some of the Pennsylvanians’ all-time popular songs. These songs peaked at #1 in the US.

Other favorites include “I Scream-You Scream-We All Scream-For Ice Cream,” “Collegiate,” “”The Sweetheart of Sigma Chi,” “I’ll Always Be in Love with You” and “Just Another Day Wasted Away.”  While these records did not reach number one, they firmly held onto the #2 and #3 positions.

As mentioned, Waring’s Pennsylvanians also dabbled a bit in films.  Their first was entitled “Fred Waring and His Pennsylvanians,” which they did in 1927. In this, the band performed three musical numbers for Vitaphone.

Their second one was “Syncopation” in 1929 and directed by Bert Glennon. This sound film was RKO’s first musical. The story revolved around a pair of vaudevillians whose life was disturbed by a dashing millionaire.

Some links to their music: