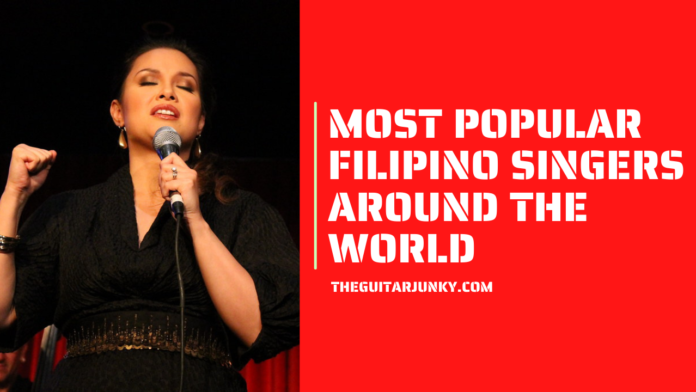 The Philippines is home to many notable world-class singers, with some even garnering worldwide stardom and recognition owing to their brilliant singing voice.

Here, we will provide you with a list of the most famous Filipino singers around the world, from a Disney princess slash Broadway legend to new rockstars for you to discover.

Lea Salonga is a real-life Disney princess voicing the singing voice of the Arabian princess Jasmine and the Chinese soldier princess Fa Mulan.

She is also the first Asian to win the prestigious Tony Awards for her role as Kim in the Broadway hit Miss Saigon at age 18.

She would also go on to win the Olivier and the Theatre World Awards for the same role.

Lea Salonga is a trailblazing artist and the first Filipino to be world-famous.

She continues to sing and work for her philanthropic projects; truly an inspiration to many people with theatre aspirations.

Charice, now known as Jake Zyrus, is an amazing singer of international acclaim and a trans male icon when he came out in 2017.

He got his start from the Filipino singing competition Little Big Star but gained internet stardom when videos of him singing were uploaded on YouTube.

He has then been invited to the US to sing for notable people like Ellen Degeneres and Oprah and was also featured as a guest star in the hit show Glee.

Jake has since been making a name for himself as a strong male singer and is now recognized for his confident tenor.

Arnel Pineda is the definition of a success story; he came a long way from rationing a small pack of biscuits to eat for two days to become the lead singer of one of the world’s best-selling rock bands, Journey.

Arnel Pineda has been singing all his life before performing at local bars and hangouts in Manila for a living.

He was discovered by Neil Schon on a series of YouTube videos where he was crooning to different songs by classic rock bands including Journey.

Since then, Arnel has been touring with the band worldwide.

Regine Velasquez probably has the most versatile voice in the Philippine music industry because of her extensive vocal range and her wonderful belting technique.

She is not only known to sell millions of albums locally but also garnered international success as over a million of her albums were sold in Asia, earning her the nickname Asia’s songbird.

Her versatility does not only come in her vocal range but also in what she can do since she’s also hailed as an amazing local actress.

Gary Valenciano or Mr. Pure Energy is the characterization of his moniker since all his performances do not only showcase his singing but also his dancing abilities.

Gary V has been in the Philippines’ music industry business for 34 years and is still active and thriving to date.

Many of Gary V’s albums go on to sell and earn multi-platinum awards, from his pop and ballad album and his worship song recordings.

Rachelle Ann Villalobos Go-Spies is an international theater actress and Filipina singer that joined and won singing competitions, including that of Eat Bulaga, the country’s longest running variety show, when she’s only 11 years old.

Her song “From the Start” won Silver Prize Award at the prestigious Shanghai Music Festival (2005) and her “Isang Lahi” winning “Best Own Song” at the Astana International Song Festival (2005).

She also performed in different musicals, including on Broadway and in the country, with her debut as “Ariel” in the Little Mermaid (2011) that also earned her “Best Actress” award from the Broadway World Philippine Awards.

You can consider Sarah Geronimo as the Philippines’ Taylor Swift, with millions of dedicated fans looking up to her as a role model, sold-out concerts, and best-selling albums.

She got her spotlight from Star for a Night which she won in 2002.

In 2015, Sarah’s The Breakup Playlist broke the Billboard World Albums, peaking at the 9th position, and her single Tala entered the World Digital Song Sales in 2020, peaking at number 12.

Her stardom has reached the international level, with her winning an award in MTV Europe in 2014.

John Edward Madela Tajanlangit is a Filipino recording artist, singer, TV host, songwriter, and occasional actor; he was the first Filipino ever to win the prestigious title in the World Championships of Performing Arts.

Also referred to by the media as “The Singer’s Singer” and “The Voice,” the countertenor artist is one of the best male singers in the Philippines.

He’s also the first Filipino inducted into the WCOPA’s Hall of Fame, alongside Liza Minnelli, a world-renowned actress and singer.

Known as Asia’s Soul Supreme, KZ won the Philippine franchise of The X Factor, and she gained international stardom by joining Singer 2018 on HBS; since then, she has been unstoppable.

Her edgy style of singing made her a standout in a lot of balladeers in the Philippines.

She is part of a girl group called DIVAS together with other well-known Filipina singers and has been a contestant in several singing competition games on Philippine TV and even won a million pesos in one.

Moira Dela Torre is a Filipino singer and songwriter getting her start by covering songs on the internet and singing for company jingles before catapulting to fame in her own right.

She got her start by being a contestant of the Philippine franchise of the singing competition The Voice.

In 2017, her breakthrough came when her cover of the song “Titibo-tibo” won her the Himig Handog music video competition.

After that, it’s the sold-out concert for her and in December 2018 she became the number 1 streamed artist in the Philippines according to Spotify.

We hope that providing you with our list of some of the best Filipino musical artists will encourage you to listen and open your world to the wonders of Pinoy talents.