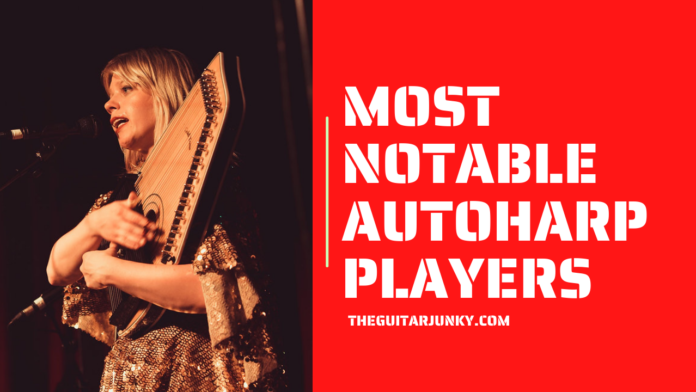 Who are the most notable autoharp players in the world? But before diving into this topic, let’s have a bit of fresher about the autoharp. Is it an actual harp? No, it isn’t.  This musical instrument doesn’t belong to the harp family, but it’s a zither type.

A zither, anyway, is a type of stringed musical instrument. However, its strings aren’t extending beyond a sounding box.  Also, the autoharp resembles a guitar’s body, but it doesn’t have a neck.  Played through plucking or strumming, modern autoharps have 36 or 37 strings. Enough with that. Now, who in the world are the most famous autoharpists? Let’s find out.

He’s a world-renowned autoharp performer whose fame has made a buzz in the autoharp playing scene. Bowers’ in the hall of fame; in fact, Frets Magazine also named him the autoharp player of the year for five consecutive years, and that’s until they wouldn’t let Bowers compete again.

He’s one of the world’s great stringed artists alongside Mark O’0Connor, Chet Atkins, and David Grislam.  Bowers was shocked to be a part of this group, and later stated it was like a comedy to him.

Known for playing in concerts, Mueller already won competitions. She’s one of the top mountain dulcimer and autoharp players performing on different stages. She’s also known for her unique performing style that features contemporary, Celtic and Appalachian music.  From LA to Boston, Mueller’s been applauded by her audience.   Many regards her as a true virtuoso because of her perfect timing, touch and taste.

He’s known as a virtuoso and American folk musician that won Autoharp Champion (North Carolina) when he was five years old.    His playing style was more on the drag note, a technique based on the artist’s left-handed playing style that produces slurred notes.

He’s been an influence and force among other autoharpists across generations, even if his output in recording was small.  In the music world, Snow was regarded as the first modern autoharpist.

[The drag notes playing style can affect the musical phrasing’s timing, so it is critical in a musical piece.  It is best played with someone familiar to it or solo.]

While performing with daughters back in the late 1940s, she used and brought the autoharp to fame, making it the lead instrument.  A huge number of recordings from the members of this musical family has used an autoharp.

An award-winning performer, June Carter Cash was another notable autoharp player in the world. Aside from being one of those that popularized this zither, June was also a comedian, dancer, singer and songwriter. She was a member of the then-famous Carter Family.

Cash was known for playing different musical instruments including harmonica, banjo and guitar, too. In 2009, she also became a part of the Christian Music Hall of Game and won five Grammy Awards.

Prairie Empire’s singer and songwriter Ashford is known for performing with her autoharp in many performances and music. One of those was in the There, but for You, go I” release in 2008.   She also plays on the autoharp in the 4-person song cycle “Ghost Quartet” by Dave Malloy.

Known internationally for playing autoharp in different styles, John Hollandsworth has been obsessed with and playing since childhood.  He got inspiration from his musical family that played different musical instruments.

His efforts, passion and accomplishments as a luthier, teacher and player got him into the Autoharp Hall of Fame along other players, including Bryan Bowers and Maybelle Carter.

John was also “Mountain Laurel Autoharp Championship” first winner (1991) and one of the pioneers in increasing public interest in the instrument.  He teaches in autoharp classes in John C. Campbell Folk School (Southwestern North Carolina). You can hear him on DVD along with other greats in “Autoharp: Up Close and Personal.”

Born Barbara Josephine Bulat, she’s known for playing the autoharp in many of her performances.  Heart of My Own, her second album, peaked at #13 on the Billboards Charts in 2010.

Wilson is an English singer, songwriter, record producer and musician, who’s prominent in the progressive rock band scene. He was the founder, lead vocalist, lead guitarist and songwriter of “Porcupine Tree,” while also being a member of other bands. He plays many instruments, including guitar, banjo and autoharp, among others.

He co-founded this band with Chris Squire in 1968. Across three tenues, he’s a member of this band, in 1968 and 2008, and now with Trevor Rabin and Rick Wakeman. Anderson also had collaborations with artists, such as Roine Stolt and Jean-Luc Ponty. In 1976, he released “Olias of Sunhillow” his first solo album, all while still a member of Yes.  After that, he released more albums as a solo artist.  Anderson, as member of Yes, was inducted into the “Rock and Roll Hall of Fame” in 2017.

There you have the most notable autoharp players in the world that you might want to get inspiration from if you’re looking to learn playing this music instrument.

Who is your favorite autoharp player? Have you tried playing this instrument? Tell us about your experience. And if you liked this post, share it on social media today!