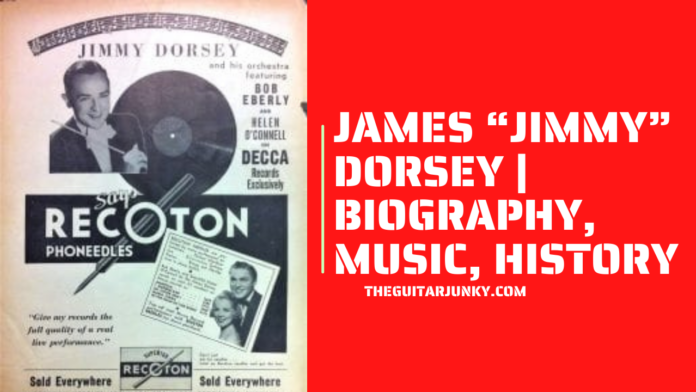 James “Jimmy” Dorsey is a very influential figure in the history of jazz. His skill on the reed has become a legend that many of the succeeding jazz greats always draw inspiration from Jimmy’s works. And while Jimmy Dorsey was born with an innate gift for music, he was also never shy in front of the motion picture camera. Dorsey is a saxophonist, a clarinetist, and a phenomenal band leader from the swing era.

Born into a music-loving family in Shenandoah, Pennsylvania on the 29th of February 1904, James “Jimmy” Dorsey began displaying a natural inclination for music early in his life. His father ditched his coal mining job to become the director of a marching band and a music teacher. He was also instrumental in the further development of the musical talent of both Jimmy and his younger brother, Tommy.

Jimmy’s earliest musical performance journey started with his father’s band when he was still 7. He played either the cornet or the slide trumpet at local parties. Two years later and the young Dorsey was already playing the trumpet with the New York-based J. Carson McGee’s King Trumpeters. In 1915, Dorsey switched from trumpet to alto saxophone, before adding the clarinet to his list of instruments played.

James collaborated with Tommy in creating the Dorsey’s Novelty Six in 1920. His brother played the trombone. A couple of years later, the Dorsey combo has attracted attention in the Baltimore area. The duo changed their name to Dorsey’s Wild Canaries around this time. They were one of the very first jazz bands ever to enjoy significant air play on radio stations.

From 1922 to 1926, James continued to hone his skills. He performed in big bands, jazz groups, and even bands that play in Broadway musicals. Jimmy joined the Frankie Trumbauer Orchestra and performed the Singin’ the Blues, a now-iconic jazz standard. In 1927, Jimmy and Tommy formed the Dorsey Brothers Orchestra. The group included Glenn Miller on the trombone, Ray McKinley on the drums, and Bob Crosby on vocals.

The band saw one of their creations – Coquette – performing well on the charts in 1928. It was Let’s Do It that finally breached the top 10, also in the same year. Unfortunately, disagreements over the band management led to the breakup of the group in 1935.

James reformed the band and called it Jimmy Dorsey and His Orchestra. He partnered with the Bing Crosby Kraft Music Hall to provide the radio show with instrumental accompaniment. The band also played the instrumental backing of many of Bing Crosby’s recordings, including Pennies from Heaven.

Dorsey decided to focus on his own musical career in 1937. He partnered with Bob Eberley as his vocalist. Helen O’Connell joined Dorsey’s band in 1939 and formed one of the era’s most successful duets. Both Eberley and O’Connell had a next-door-neighbor kind of charm that almost anyone can relate to. And with Dorsey’s soulful saxophone providing the backing, the group was able to record hits after amazing hits. Part of the band’s success was attributed to Dorsey’s employment of Joe Lipman.

Jimmy reunited with his brother in 1945 and began recording several musical pieces on the V-disc. The songs featured the orchestras of the Dorsey brother. It was in 1947 when the brothers pushed their differences aside to create The Fabulous Dorseys film.

The pair renamed their orchestra as Dorsey Brothers Orchestra in 1953. Jimmy took a backseat as Tommy held the lead. Nevertheless, Jimmy was the band’s featured soloist. They appeared on the CBS program of Jackie Gleason in December of the same year. Gleason was impressed by the brothers that he produced the Stage Show, a variety TV show that aired on a weekly basis. Gleason had the Dorsey brothers host the said show until 1956.

Jimmy Dorsey continued to perform at events, even with the demise of his brother in 1956. He wrote and his band recorded So Rare in the early months of 1957. The song would peak at the Billboard chart’s number 2 spot at the time of Jimmy Dorsey’s death on the 12th of June 1957.

Most of the musical pieces that are credited to James Dorsey were all co-written with either his brother or other artists whom Dorsey collaborated with. However, there are two songs that have been credited solely to Jimmy. These songs included Praying the Blues and Beebe for the Okeh recording company in 1929.

Some of the most famous compositions of Jimmy Dorsey included So Many Times, Is it True What They Say about Dixie?, Amapola, The Breeze and I, Green Eyes, Besame Mucho, Pennies from Heaven, Change Partners, My Sister and I, John Silver, Maria Elena, Dusk in Upper Sandusky, Tangerine, and Outer Drive, among others.

Dorsey is best known for the creation of several jazz standards, including Tailspin, In This World of Ordinary People, and It’s the Dreamer in Me.

Jimmy Dorsey was not only active in the music industry. He also graced the big screen in several Hollywood motion pictures. The very first two films that Dorsey appeared in were Alice Boulden and Her Orchestra and Segar Ellis and His Embassy Club Orchestra in 1929.

Almost a decade later, Jimmy and His Orchestra featured in a film of their own. They played several their hits, including Parade of the Milk Bottle Caps, I Love You in Technicolor, and It’s the Dreamer in Me. In that same year, Dorsey appeared in the Dave Fleischer film, You Leave Me Breathless.

The United States Postal Service recognized the Dorsey brothers’ remarkable contribution to the development of jazz and pop in the country in 1996. The agency designed, produced, and distributed a limited-edition commemorative postage stamp that featured both Jimmy and Tommy Dorsey.

The Recording Academy inducted the 1942 recording Aquarela do Brasil to the Hall of Fame of the Grammy Awards in 2009. The musical piece was one of Jimmy Dorsey & His Orchestra’s finest creations.

Some links to his music