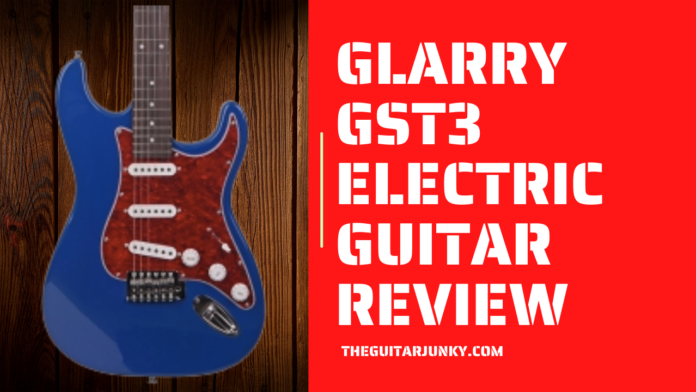 Glarry Music is an online clearing house for their own brand of instruments, all made overseas, usually in China.

Offering violins, guitars, basses, and accessories at incredibly low prices, they have largely sprung up in popular music media thanks to recent YouTube and online guitar magazine reviews.

For this review, I’ll be taking a look at their most popular guitar, their GST3, which is an eye-catching alternative to traditional Squier Stratocasters for about half the price. Let’s dig into the playability, tonal options, build quality, and value of this stunning “Blue Sunset” guitar.

Glarry GST3 Electric Guitar
4.5
CHECK PRICE ON GLARRY CHECK PRICE ON AMAZON
We may earn commission from purchases made from our links, at no additional cost to you.

Construction and build quality is usually where most affordable guitar manufacturers can cut costs. So quality control, final set-up, and design may be prone to flaws when you’re paying only $60 for a guitar. In the case of the Glarry GST3 is quite a mixed bag, some things are surprisingly well done while others clearly need work or upgraded parts. 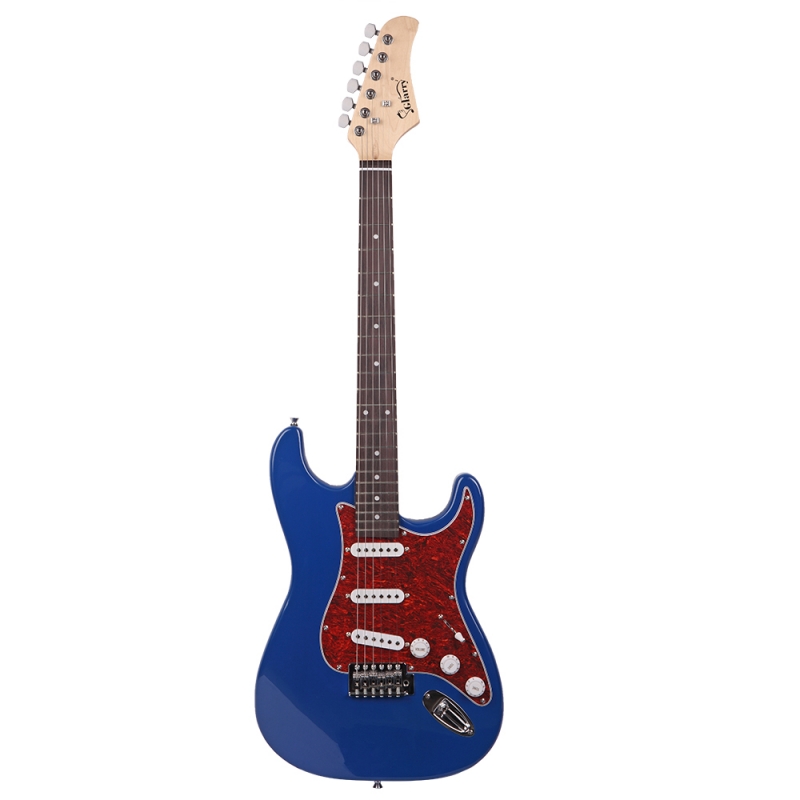 Let’s start with the good; I was pretty happy to find the quality fret work when I first picked up the GST3. With no rough edges, no dead notes, and only sparse fret buzz, the fretboard gets great marks. However, the rest of the neck left much to be desired thanks to the thin finish and huge radius.

The neck is wide, and somewhat unwieldy and uncomfortable, making it a poor choice as a beginner instrument. The tuners are cheap, as to be expected, and quickly lose tuning stability as you bend notes and bash chords. 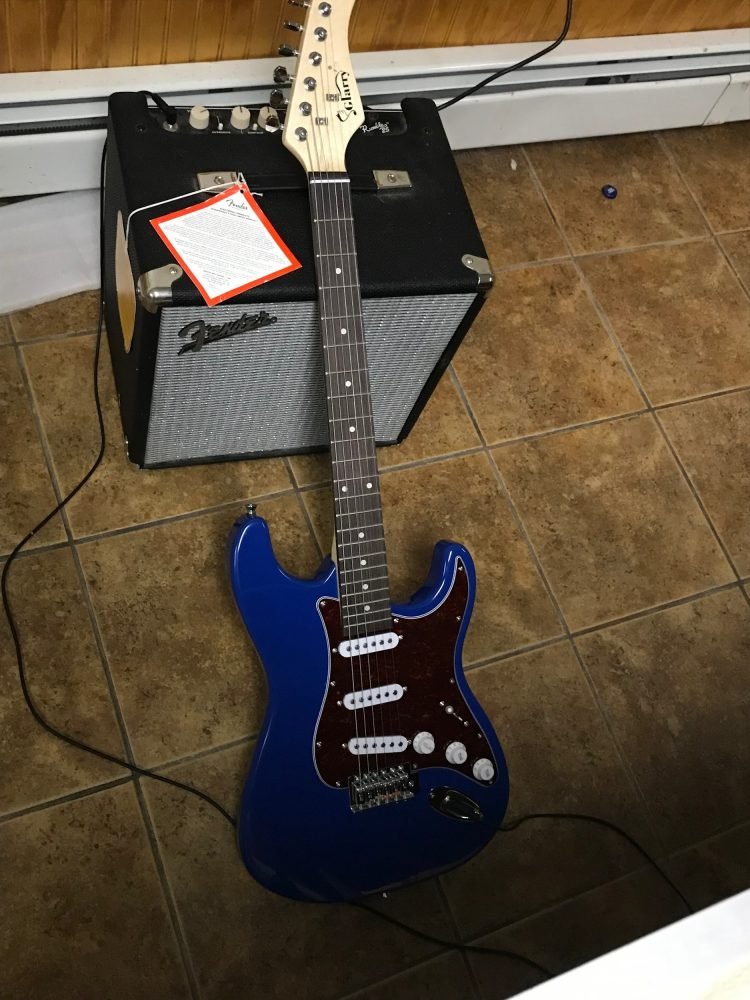 On the other hand, the Blue Sunset finish was great, and the guitar arrived with no chips or dings. Furthermore, while many of the components are cheap, the guitar itself isn’t built poorly. The routing is all correct and to scale, meaning that the guitar could be made more playable by simply swapping out parts. The scale length is as advertised, and there were no physical signs of damage or errors.

The playability of this guitar is very much tied to the construction, and has both good and bad features. As I stated before, the fretwork is actually pretty well done and comfortable to play. All 22 frets were easy to access but the frets could best be described as a medium size, not too uncomfortable, but not jumbo. 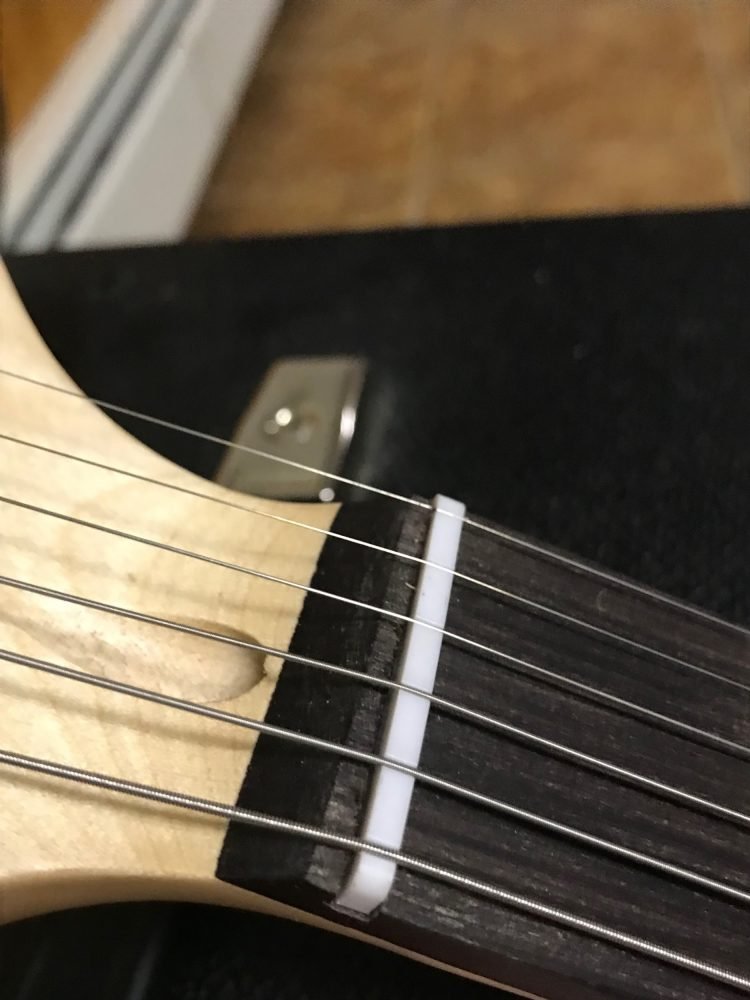 The neck is where most of the issues are, as it is just simply too big. Think of a baseball bat on steroids. The maple neck features a Rosewood fretboard and is reported on their website of having a 1.656 inch nut width, that’s larger than a P-Bass nut width!

Lastly, the tuning is just not stable enough to play the GST3 on stage. It took awhile to get it in tune and it didn’t last long after some bends and hard hit barre chords. While the included Whammy bar is a nice feature, it throws the guitar out of tune almost instantly thanks to a cheap, thin bridge block. There are several quick fixes that can be done to improve playability, and this guitar isn’t a totally lost cause, especially considering the price.

The GST3 is a Stratocaster copy and generally sounds like one. The three single coil pickups and a 5-way selector switch provide you with all the stereotypical Stratocaster tones you’d expect. From fat, lead tones on the neck, to treble-rich rhythm tones near the bridge, each selector switch position sounds different.

While the pickups generally do a good job of copying that Stratocaster-style, they are simply too thin and provide too low output to admirably recreate the famous tone. The guitar also featured somewhat of an interesting phenomena when I tried to engage drives or distortion pedals on top of it. Basically all of the high frequencies cut out, even when I cranked the tone knobs on my pedals, it was really strange and made it so the guitar could really only be played clean. This pickups will have to be replaced, there is no getting around it.

The neck settings were all bass heavy, the bridge were all trebly heavy, and the guitar needed a lot of EQ work to get some nice, clean tones out of it via solid state and tube amplifiers. At the end of the day if this is the only guitar you can afford than it will get the job done, but if you can afford more, you should spend more.

Value for the money

This is one department where this guitar shines, coming in at under $80 USD, it just can’t be beaten. With the guitar comes a very thin travel bag for it, the whammy bar, a cable, guitar picks, and a strap. All this for $60 is a bargain no matter how bad the guitar is. The guitar also arrived in great shape and well packaged, so you shouldn’t expect any damage or major flaws out of the box. 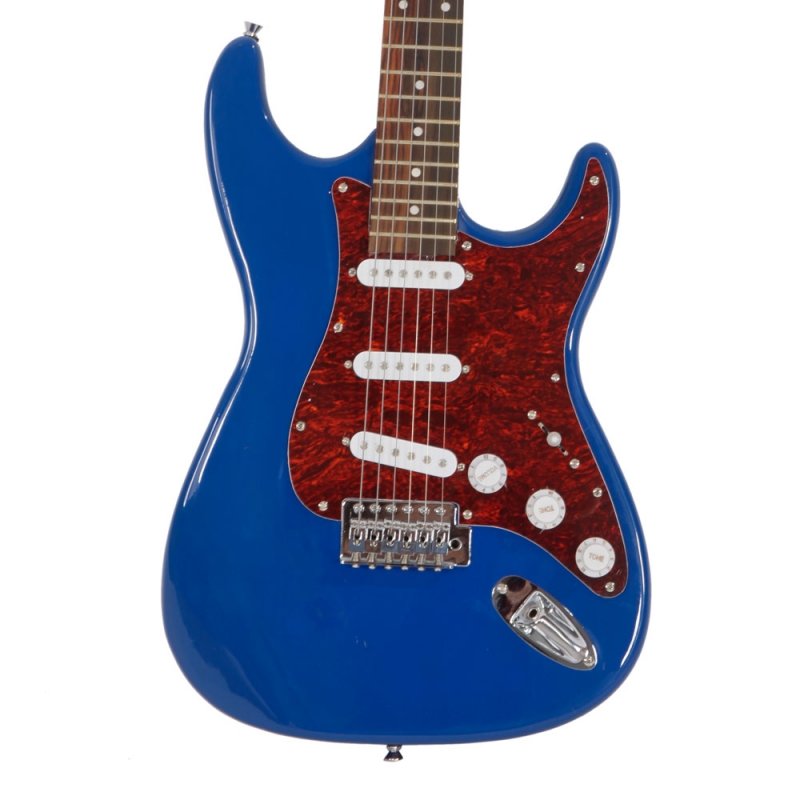 The real value here is if you’re a somewhat experienced player and buy this guitar as a project guitar. If you’re looking to practice your guitar tech skills such as soldering in new pickups, swapping hardware, or replacing the neck, this is the perfect guitar to learn on. Plus, the finish and aesthetic of these guitars is gorgeous, meaning with some new pickups and hardware, you’ll get a great looking and great playing partscaster for a minimal investment. I definitely don’t expect anyone to purchase this guitar and be disappointed in what they got.

Glarry GST3 Electric Guitar
4.5
CHECK PRICE ON GLARRY CHECK PRICE ON AMAZON
We may earn commission from purchases made from our links, at no additional cost to you.

While I don’t think any beginners should use this a student guitar, I do think it is worth the price for players needing a backup, project, or throw-around guitar. It plays, it eventually gets in tune, and it’s super cheap, all good things to consider when buying an instrument. I also can’t recommend the GST3 enough as a guitar to hot-rod or modify in your spare time. Even the simplest of modifications can turn this into an awesome Stratocaster-alternative. If you’re willing to replace the bridge, neck, and pickups, then the Glarry GST3 is for you.

The Glarry GST3 is a new entry to the affordable Stratocaster-copy market, and is likely the cheapest on the market, coming in at around <a href="https://www.glarrymusic.com/glarry-st3-electric-guitar-p8.html" rel="nofollow" target="_blank">$60 via their website</a>. While they are plenty of playability and tonal issues we’ll discuss later, the construction and build quality is a pleasant surprise for this price. Even if the guitar itself doesn’t impress you, it may be a perfect partscaster project waiting to happen.Glarry GST3 Electric Guitar Review ([year]) - Ultra Cheap, But Is It Worth It?
GUITAR JUNKYMore Than Just Guitars, We Are Music
Facebook
Instagram
Linkedin
Twitter