Fender Stratocaster vs Telecaster – Key Differences and Which is Better? 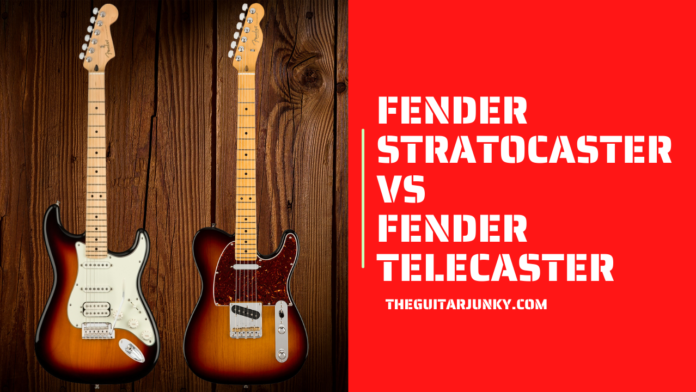 The Fender Stratocaster and Telecaster are an enormous favorite of rock legends, aspiring artists, heavy metal bands, and everyone else in between. Beginners often find themselves at a loophole, trying to figure out which between these legendary electric axes they should take.

While most people will say either will do, that is not often the case. Each guitar has its unique sonic characteristics suitable for a specific music genre. Choosing between the Fender Stratocaster and Telecaster is more about which electric guitar brings the best sound to one’s kind of music. Fender American Ultra Luxe Stratocaster
4.7
CHECK PRICE ON SWEETWATER CHECK PRICE ON GUITAR CENTER
We may earn commission from purchases made from our links, at no additional cost to you.

The prettiest and most famous electric guitar of all time, the Fender Stratocaster continues to command a strong cult following, with its classic curves, phenomenal sound, and exceptional comfort playability. It has three single-coil pickups and robust electronics to produce the most electrifying sounds the world can ever hear. Fender American Ultra Luxe Telecaster
4.7
CHECK PRICE ON SWEETWATER CHECK PRICE ON AMAZON
We may earn commission from purchases made from our links, at no additional cost to you.

Since 1952, the Fender Telecaster has been wowing the crowd with its exceptional playability, versatile performance, and ear-splitting sounds. Considered by experts as a sonic chameleon, the Tele has two single-coil pickups and a metal bridge plate that gives its sound more depth and better resonance.

Read: Best Telecasters for the Money

One of the distinct differences between the Telecaster and the Stratocaster is their body shape. The Strat features a classic ‘upper horn’ or ‘ear’ that lends the guitar an asymmetric look. This unique feature gives Stratocaster players greater access to a song piece’s higher registers.

Playing the glass-shattering high notes of Painkiller’s intro or Angel of Death should be a cinch. If one desires to be the next Tony Iommi, Jimi Hendrix, Buddy Holly, or Eric Clapton, the Strat is an excellent starting point. 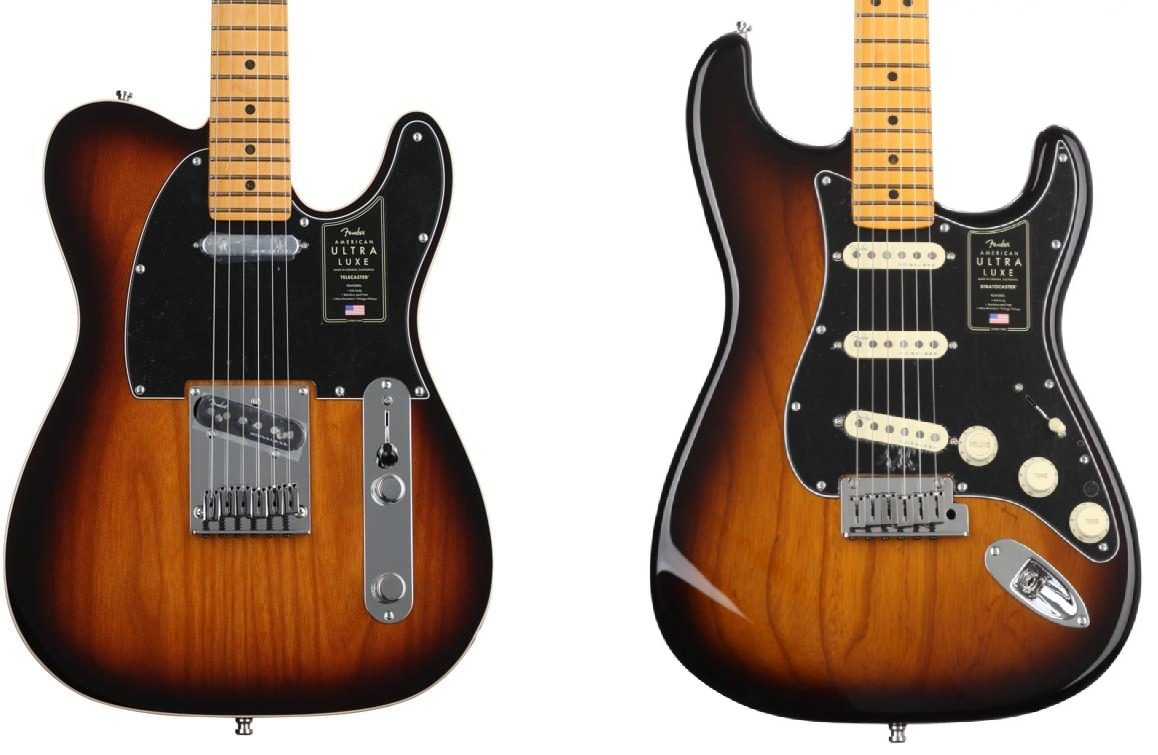 Another difference is the body contour, which the Fender Telecaster has a simple, single-cutaway design compared to the Strat’s sleek and comfortable lines.

Beginner guitarists may shrug these attributes as nothing more than for aesthetic purposes. However, the Strat’s curvaceous silhouette lends to its overall comfortable playability. Electric axemen play the Strat longer than the Tele because they feel more relaxed.

Both Fenders feature an Alder tonewood, giving them a snappy sound. However, some Strats and Teles feature Ashwood, making their sound more resonant and with greater depth.

Seasoned guitarists point to the Tele and Strat’s hardware as their distinguishing feature, especially the bridge. While both electric guitars offer a bridge with six adjustable saddles, the Tele has a bridge pickup with a piece extending right below it. 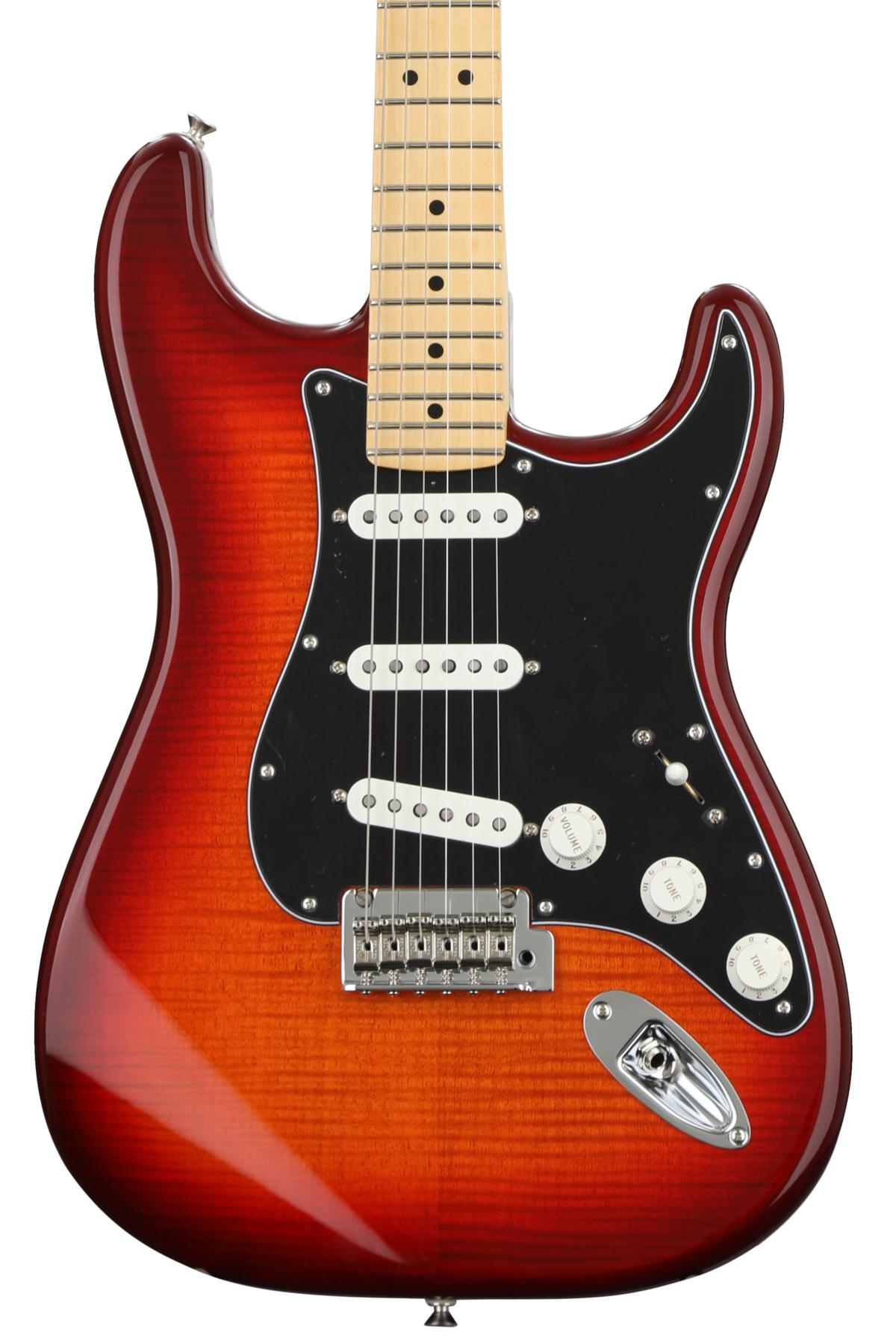 On the other hand, Strats feature a two-point tremolo system, giving players the chance to create soul-stirring vibratos. The Stratocaster bridge also has strings connecting it to the guitar body, empowering guitarists to lower and raise the strings’ pitch effortlessly. There is also a ‘whammy bar’  that makes producing the vibrato effect more engaging and thrilling.

The issue with the Strat design is its tuning consistency. Novice players may find the Strat consistently out of tune. That is why many seasoned guitarists try to ‘block’ the Strat’s bridge to stabilize it and ensure more consistent tuning. 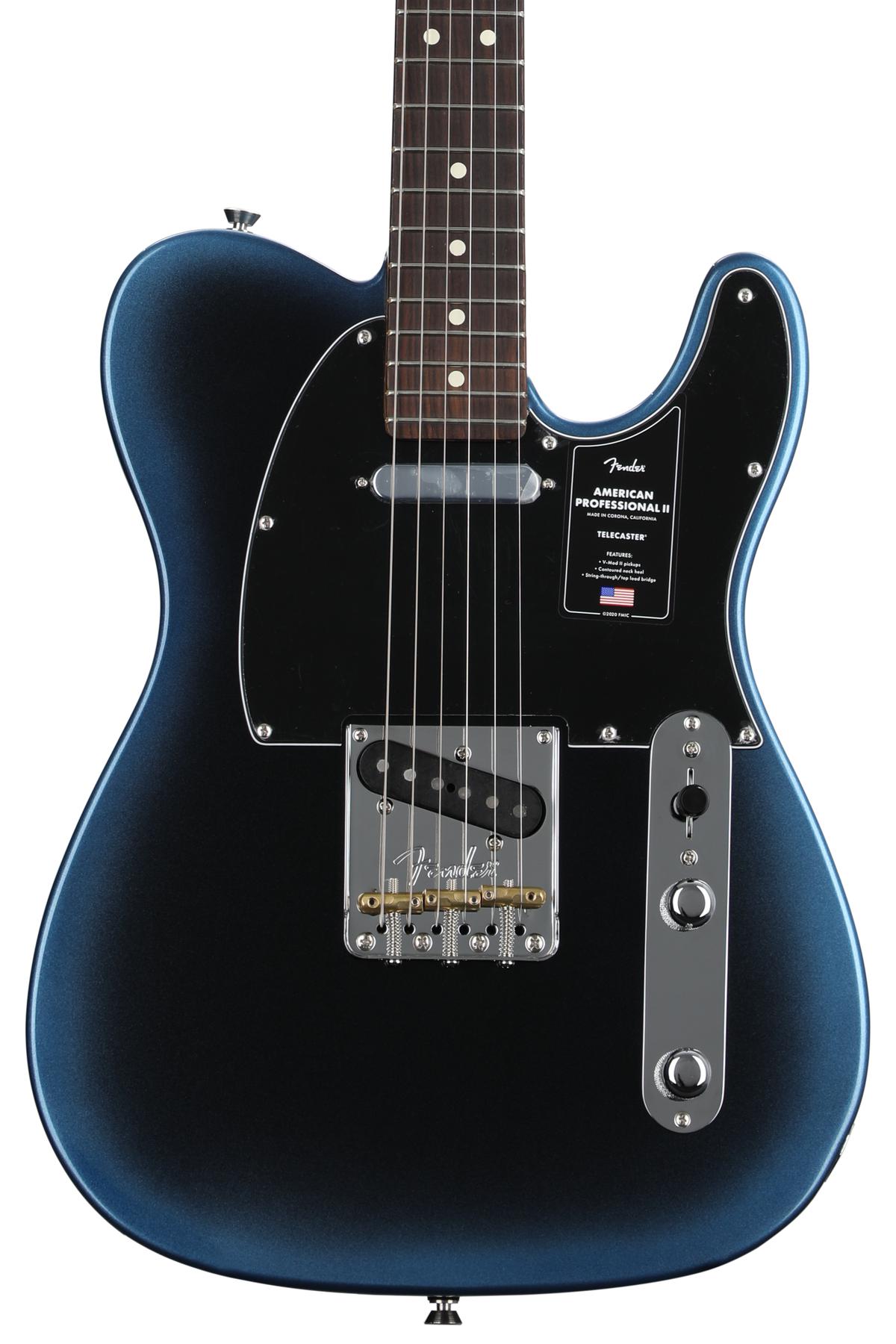 The Telecaster offers better tuning consistency and stability. Unfortunately, it does not provide the same tremolo effects one can get from a Strat. The good news is that there are accessories one can install on the Tele to achieve the sound effects of the Strat.

Another difference between the Telecaster and the Stratocaster is their single-coil pickups. The Tele has two, while the Strat has three. There is also a difference in the pickup design.

On the other hand, the Stratocaster has a well-polished, rounded, and bell-like tone. The pickups have a 3-way switch that guitarists can tweak to produce the desired output from each pickup.

Regardless of which music genre one wants to excel in, the Stratocaster and Telecaster make formidable electric guitars.

Fender American Ultra Luxe Stratocaster
4.7
CHECK PRICE ON SWEETWATER CHECK PRICE ON GUITAR CENTER
We may earn commission from purchases made from our links, at no additional cost to you.

Fender American Ultra Luxe Telecaster
4.7
CHECK PRICE ON SWEETWATER CHECK PRICE ON AMAZON
We may earn commission from purchases made from our links, at no additional cost to you.

However, the Fender Stratocaster is more suitable for those who want a broader and deeper palette of tones. If one prefers greater versatility and tuning consistency, the Telecaster is always an excellent choice.