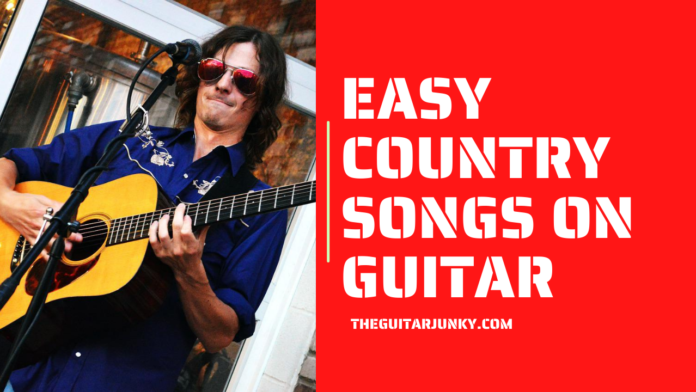 Looking for easy country songs on guitar for your to learn?

You’ve bumped to the right post!  We have compiled 15 of the most popular country songs for beginner guitarists. Check them out.

With the chords A and E, you can easily play along to this pop country classic and might even win some hearts. This is an upbeat, cheeky tune that’s fun and easy to learn. With enough tenacity, you can even master that Billy Ray Cyrus swagger with the mullet to match. Since it’s pretty rudimentary, you can catch on to the more complicated strumming patterns if you want a bit of a challenge.

It can’t get any more country than singing about having fun on the bayou. This easy country song is another go-to for beginner guitarists. It only has two guitar chords – C and G7, and the slow, steady strumming gives the song a laid-back vibe.

Learning this Hank Williams classic country tune won’t tangle up your fingers with complicated chord progressions, so if you’re new to guitar playing, this is a great song to learn first. If you want to level up a little, you can then follow the more fast-paced Carpenters’ rendition.

Coming from the queen of country music herself, Jolene is an easy country song to learn. It’s got a rudimentary strumming pattern and features three chords: Am, C, and G. This emotional, desperate plea of a song is packed with musicality with a catchy tempo to balance out the moody chord progression.

Listening to it would make you want to talk to Jolene yourself, and playing it feels like your pleading. It’s a remarkable piece that’s a great way to practice varying strumming speeds. Once you’ve got the shifting chords down, you can then try to do the plucking pattern.

Another Dolly Parton classic you can test your skills on is the hit love song I Will Always Love You, which has four chords. If you want something more challenging, you can then try and learn another Dolly classic,  Coat of Many Colors, which has five chords.

This old classic couldn’t be any easier with its classic G-D-Em-C chord pattern. The original version by Old Crow Medicine Show is an easygoing, banjo-sprinkled tune that’s great to sing along to. This was originally written by Bob Dylan and Ketch Secor in the 1970s, and there’s a soulful, revamped 2013 rendition by Darius Rucker. If you’re looking for a guitar song to get you started, this one is perfect for beginners.

This dancey, honky-tonk vibe of a song only has three basic open chords – A, D, and E. Before you think this is too easy, have a listen and notice that it features some pretty advanced shuffle-strumming techniques.

Because the chords are so simple, it’s a fun song to jam and improvise on. Merle Haggard managed to pair the somber lyrics with a jammable, head-bopping tune, turning this sad song into a dancefloor favorite. This is a great song to practice your strumming and your dance moves on.

Country Roads is arguably the poster child of country songs, as it’s known worldwide to the point of being cliche. Despite that, it’s still a classic favorite that has transversed many decades. This all-time classic by John Denver consists of four basic chords, namely G, D, Em, and C. The verse is a G-Em-D-C-G pattern, and the chorus is a G-D-Em-C pattern.

It features an easy-to-follow strumming technique and is fun to sing along to. Because everyone knows this heartfelt, emotional song, it’s bound to be a surefire hit around a campfire. Safe to say that everyone knows this song by heart, so pick up that guitar and learn this country classic. You’ll get it down in no time.

Bringing it down nice and slow is this steady, emotional song by Christ Stapleton. With just four chords – E, A, Bm, and D – this soulful declaration of affection is a great way to learn some changing chord variations. The four chords of this song get mixed around in different parts, which after some practice will be a piece of cake.

There’s a nice little electric guitar solo in the middle, and the acoustic strumming is loud, scattered, and strong – adding to the angsty vibe. Master this soulful song and its strong vocals and you might attract some swooners.

When You Say Nothing At All by Keith Whitley

You might be more familiar with the modern renditions of this song, as it was popularized by Alison Kraus in 1995, and then by Ronan Keating in 1999. You’d be surprised to learn that it’s a heartfelt country song that’s pretty easy to learn. Like most country songs, it features just three basic chords, namely D, A, and G.

There are variations to the D-A-G further on in the song, but since these are fairly easy chords to play, the sudden shifts won’t catch beginners off-guard. Add a bit of that country twang in this tune, and it’s a whole different experience from the more popular ballad. This is one of those songs on guitar that are great for practice.

This big bop of a pop-country song is easy to follow with a G-D-Em7-C chord pattern that flows through the whole song. It’s got a pretty standard strumming pattern, one that you’ll need to get used to if you’re still a beginner guitarist.

The full-on twang that Florida Georgia Line gives this song adds a lot of energy and color, which is what makes this song so catchy. It’s very easy to follow, so expect some new friends to come to sing along with you if you decide to play this at some amateur shindig.

On the Road Again by Willie Nelson

Coming up on this list is the upbeat road trip tune by Willie Nelson. No other song encompasses long highways and the high noon atmosphere better. It features six easy-to-execute chords, namely C, E7, Dm, F, and G7. Once you get these chords down, you can start getting familiar with the strumming speed – which is a little faster than most songs.

With the same set of chords, the verse then follows a C-C-E7-Dm-F-G7-C pattern. Then the chorus eases up on an F-C-F-C-G pattern. Don’t get intimidated by the fast-paced vibe – take it slow and master the chord changes, then pick up the pace later on. In no time, you’ll be strumming to this classic during every road trip.

Here’s another John Denver rendition you might want to try. Thank God I’m A Country Boy is a working-class anthem that uses just four chords – A, D, G, and E7 – and a downward-oriented strumming pattern that’s fun for beginners to learn. The verse and chorus playfully mix these simple chords, which is a great way to improve on speed and accuracy in your guitar-playing. Once you’ve mastered this up-tempo classic, it’s bound to get you some enthusiastic fiddle-players and stompers in any gathering.

On a cheekier tone, Sixteen Tons is a little bit more bluesy than most of the songs on this list. This is also another country classic that will challenge your beginner’s fingers.

There are five chords to get used to – Em, Em7, C7, B7, and Am – and while it sounds pretty laid-back, there are quick strumming changes that could catch you off-guard at first. But with enough practice, you’ll be able to play this Merle Travis tune like it’s nothing. It’s a cool song to play and sing along to and is also a great addition to your repertoire.

I Walk The Line by Johnny Cash

No one goes around learning country guitar without learning some classic Johnny Cash tunes. One all-time favorite and classic from 1956 is I Walk The Line, which is a straightforward, honest expression of loyalty to your spouse. This song features six basic chords – A, D, E, B7, B, and G – that follow a steady beat and a catchy bassline.

Once you’ve mastered the strumming, you can start challenging yourself with plucking patterns. If you’re not ready for this six-chord classic, you can warm up with another Johnny Cash song entitled A Boy Named Sue, which only has three chords – A, D, and E.

This playful little number is a little bit more advanced and features six chords – G, G#dim7, Am7, D, Cm, and Am – but don’t get too intimidated, because it’s quite easy to play. Once you’ve mastered your basic strumming and want to level up, you can give this Garth Brooks song a try. There’s a lot of playful singing in this song, which also makes it great for sing-alongs and get-togethers.

I’m Gonna Be Somebody by Travis Tritt

This country song has a bit of rock in its overall vibe, with Travis Tritt’s raspy tone matching well with some electric guitar. The song follows mostly the three chords G, C, and D – with some variations towards B7, Am7, G/B, and Am in certain parts.

This is a great song to practice your newfound guitar skills on because it sticks to the basic pattern with some of the more uncommon chords popping up as a challenge. It’s a pretty easy country song, and with a bit of practice, you can even master some of the plucking patterns.

Which among these country songs on a guitar would you play first? Let us know in the comments below.

If you’re just learning guitar, check out our reviews on Fender Play and GuitarTricks, as well as our recommendations on best acoustic guitars, as well as for beginners.