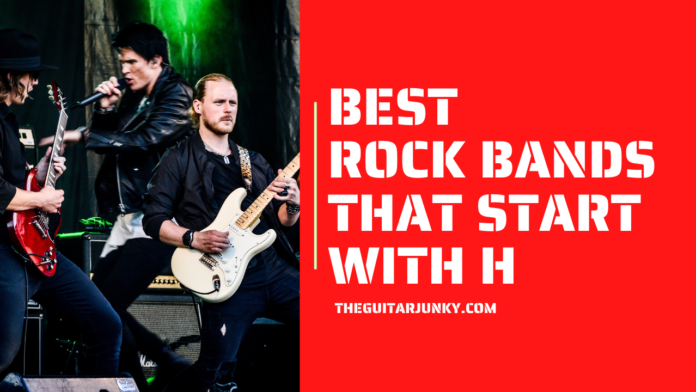 Are you looking for inspiration for your band’s name or working on research about different bands?

Or maybe, you just want to discover band names?

In this article, we’re featuring the best rock bands that start with H. Are you ready? Let’s get started.

Emerging from Seattle, Washington, Heart is a famous rock band in the folk rock, hard rock, and glam metal categories that formed in 1967.

They started with the name “The Army,” and then two years later, they chose a new name “Hocus Pocus,” before changing again to “White Heart.”

In the mid-70s, they original band members were joined by flute and lead vocals Ann Wilson, occasional lead vocals, backing, and rhythm guitar Nancy Wilson, drummer Michael Derosier, and guitar and keyboard Howard Leese, forming the band’s lineup in the beginning of the mid- to the late- 1970s, their success period.

In 2013, the core group became a part of the Rock and Roll Hall of Fame.

Their music is a combination of heavy metal, hard rock, and folk music.

But then, all good things aren’t permanent, and the band’s popularity started declining in the early part of the 1980s.

However, they made a successful return to the limelight in 1985 that continued until the middle part of the 90s.

But again, they went on hiatus and got back to the stage in 2019.

Overall, Heart has sold over 35 million copies worldwide and placed in the top 10 albums in the 1970s (Billboard 200).

Half Man Half Biscuit

Known for their surreal songs and oftentimes sardonic and satirical songs, Half Man Half Biscuit is composed of Nigel Blackwell (guitarist and lead singer), Neil Crossley (bassist and singer), Karl Benson (guitarist), and Carl Henry (drummer).

However, with the reason of “musical similarities,” the band split up in 1986.

Another band whose moniker starts with H, Halestorm emerged from Red Lion, Pennsylvania.

Through Atlantic Records, the group released their self-titled debut album on April 28, 2009, and then released “The Strange Case Of…” on April 10, 2012 with the lead single “Love Bites (So Do I).”

On February 10, 2013, the single won a Grammy Award for Best Hard Rock/Metal Performance.

This band is recognized for their almost non-stop touring around the world, reaching up to 250 shows annually.

In their career, the group has performed and toured with artists like Papa Roach, Alice Cooper, and Chevelle.

When concerts and performances were put to a stop due to the pandemic, Halestorm was one of those groups that were badly affected.

However, it didn’t stop them from performing and in 2020, they launched a fundraiser, #RoadieStrong.

It’s a fundraiser that aims at supporting live show staff and crews.

This effort was supported by fellow artists, including Shinedown and Avenged Sevenfold.

Mondays aren’t the only days when rock bands would be happy, but it should be every day.

Another rock band to include on our list of the best rock bands whose name starts with the letter H, Happy Mondays emerged from Salford in 1980.

Most of the work of this group had connected the independent rock music scene of the 80s and the rising UK rave scene.

Its influences are from house, funk as well as psychedelia – founding the sound of Madchester, as it’s called.

However, the group disbanded in 1993, and a number of times in the following decades.

This Bridgeport, Connecticut native band emerged in 1994, releasing “Satisfaction is the Death of Desire” (1997), their debut album.

This album had given them a massive following in their genre.

Following their popularity, the group signed to international label Universal Records, and then in 2002, they released “Perseverance,” which made it to the Billboard 200.

The sound is distinct and is actually one of the first to combine metal and hardcore.

They’re remarkable for their guitar assault that became the inspiration of a brutal and bleak sonic sound.

This group also earned the recognition of many and in fact earned one on the Chicago Victory Records.

Jamey Jasta, who has an intense and considered “defiant vocals,” contributed to the overall reputation of Hatebreed.

The release of their album “Satisfaction Is the Death Of Desire,” which was released in 1997, made them more popular for both fans and critics.

The group is one of the most successful in the rock band arena, having had different entries in the Top 40, as well as a #1 stop in 2013’s Hard Rock charts “The Divinity of Purpose.”

But after 6 months, Jason Barnes was added to the group and became their second guitarist.

Jimmy Ryan, who was a member of “Upheaval” (death metal band), was then recruited to become their lead vocalist.

But in 2005, Ryan left the band and accepted a Tooth & Nail Records position later.

In the beginning, they signed to Solid State Records.

They released their EP “That They May Know You” (2002), and consecutively launched other 5 studio albums, such as Attack of the Wolf King in 2010.

They split in 2011 but reunited in 2014; the following year, they released Coward.

They emerged from Dayton, Ohio and with music genres that include Emopost hardcore, pop punk, indie rock, and alternative rock.

Hawthorne Heights succeeded with both of their two releases – “The Silence in Black and White” (2004) and “If Only You Were Lonely” (2006).

Both of these albums received gold recognition.

The group’s second album peaked at #1 on “Billboard’s Independent Albums” chart as well as #3 on the Billboard 200 charts.

In 2021, they released “The Rain Just Follows Me,” their 8th full length album via Pure Noise Records.

Originating from East Central Illinois and have been active from 1969 to the present, Head East is another rock band that starts with H.

They became successful in the Midwest in the 70s and were known for “Never Been Any Reason,” their AOR hit.

They got the name Head East after Baxter Forrest Twilight’s suggestion.

They recorded their first album “Flat as a Pancake” at Golden Voice Recording Studio in 1974, and then released Pyramid Records, their record label.

The band also received honors in their career, in 2011, they were inducted into the Hall of Fame of Iowa Rock n’ Roll Music Association, and during their induction concert, the band performed on stage with their former and current members, such as John Schlitt and Steve Huston.

Their huge success was “Cracked Rear View,” their debut album, which went to 16 platinum recognitions in the United States as well as was 1995’s bestselling album.

Emerging from Lake Forest, Horse the Band was formed in 1999 and is well known for their music that is a combination of metalcore and Nintendo-influenced sound.

Currently, the band is signed to Vagrant Records.

Their lyrics are colorful, chaotic metaphors combined with abstract and humorous pop culture, which has sometimes referenced bases and titles.

Due to their web presence, the group gained a niche audience.

In their world tour in 2004, they performed in 85 shows in 90 days, and it spanned both throughout Europe and North America.

On October 6, 2009, they released “Desperate Living,” their latest album.

Which among these rock bands that start with H impresses you the most? Tell us in the comments. Finally, share this post on social media today!