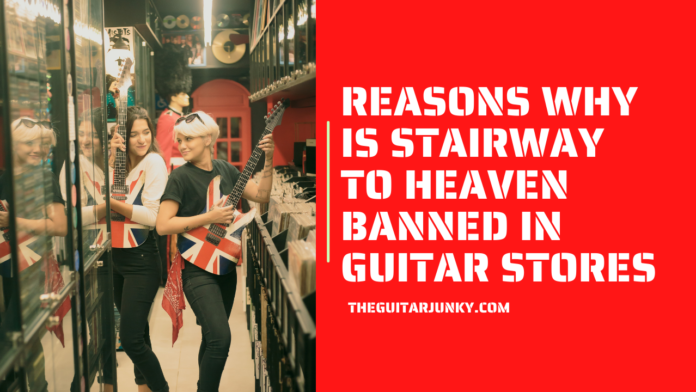 Stairway to Heaven is one of the most iconic rock songs ever written.

When you walk into a guitar store, though, it’s not likely that this song will be playing on the speakers- in fact, many stores have banned the song from being played!

Read on to find out more about what makes Stairway so special and why it’s been banned by so many retailers.

It is known as the Forbidden Riff

Stairway to Heaven is a song that is bulked with the beauty of great lyrical composition, melody, and striking intro.

Because of its angelic opening notes, most guitar players try out the song while choosing out their guitar in stores.

It infamously gained the nickname “Forbidden Riff” because of how it is commonly played.

Some people also reference the movie Wayne’s World for its gag on the song being played in guitar shops.

It is very popular

Stairway to Heaven is not just popular among people who play the guitar.

Its song lyrics and melody have captured the hearts of music lovers, and it topped charts for weeks back in the day.

The song’s popularity has stood over time.

Through the years, Stairway to Heaven has meant to be more than just a single as it paved the way for early hard rock to rise.

It is very easy to learn

One of the reasons why people choose to play this song is because of how easy it is to learn.

The song covers the basics of guitar plucking, and its angelic notes hit differently than most guitar intros.

Most beginners try their luck with this song in the process of finding their own guitar.

Guitar shop owners have heard it more than a thousand times

Because Stairway to Heaven is easy to learn and because of how popular it is, the first few strums of the song will make guitar shop owners have a foresight of what the upcoming notes are.

They have heard the song more than a thousand times, with a lot of people entering their shops and trying out their guitars.

It is nothing new to them, and in fact, they might prefer other songs to be played when searching for your own guitar.

Guitar shops might have played this song back in the day, but over time, with its popularity and ease in playing, this song has really been overplayed.

Looking into the list of overplayed guitar songs would be a no brainer, and this song just tops the list.

Even outside guitar stores, the song has been a hit on the radio and in various online streaming sites.

With its influence, it is even still being played now.

The impact of the song has stayed through the years because it has the perfect guitar intro and it has a deep lyrical meaning.

It is the first song most guitarists learn

The song has a simple intro –the plucking is not complex, and the chords of the song are easy to learn.

Aspiring guitarists love to learn songs that are easy to adapt with, and songs that sound great even with simple techniques.

And Stairway to Heaven perfectly fits this box and is very well suited for beginners.

Other songs are not played

The notion that Stairway to Heaven is the staple guitar intro in guitar stores limits the guitarists from exploring other songs.

Because of how simple it can be played while still sounding cool, some songs are missed out.

Guitar store owners don’t blatantly ban the song from their guitars, yet they would love to hear other songs being tried on their instruments.

It is basic etiquette not to play the song

Although it is not a written rule, it is basic etiquette to skip playing Stairway to Heaven when choosing the guitar.

Playing other songs or plucking out your own songs would do the guitar store owners a favour.

There are no physical signs that show how the song is banned.

But it is really basic etiquette to skip playing an overused song’s guitar intro while looking for your own instrument.

The joke from the movie was embraced

The movie Wayne’s World banned Stairway to Heaven as a joke.

However, there is some truth behind why Stairway to Heaven was not allowed to be played in that guitar shop.

In the movie, Wayne portrayed by Mike Myers was about to play a riff with the guitar, but was instantly stopped by holding the fretboard, and the sign showing “No Stairway to Heaven” was focused.

The joke was since then embraced by a lot of guitar shops.

Although it is not really posted, this joke persisted and is now a silent rule in most guitar shops.

It is basic to know that most guitar shop owners have watched the movie and embraced this silent rule to their own shops.

Although people would accept the film’s take on Stairway to Heaven as a joke, there is some truth behind why it was not played in the guitar shop.

As Mike Myers was about to play the song, he was abruptly stopped by the store clerk.

At the time of filming, Led Zeppelin rarely agreed to film producers to license his music.

Wayne’s World apparently did not get the license to play Stairway to Heaven.

They took this out as part of the movie without really playing the song as a joke.

That scene was a hit for more than a decade and is still a running joke to this day.

This ban is not without its detractors.

One of the most common arguments for keeping it on shelves, or at least available in some stores, is that if a guitar store bans “Stairway to Heaven,” they’re going to lose their business to another place which doesn’t have such a restriction.

But this argument fails because there are many other songs with similar levels of iconic status and popularity as “Stairway”–albeit different genres–that could be used instead so customers can still get what they want from the same location.

So why do you think Guitar stores banned Led Zeppelin’s “Stairway To Heaven”?

What would happen if your favorite band was banned?

Let me know in the comments below.