In 1994, Bob Taylor designed the Grand Auditorium guitar from scratch to commemorate the 20th anniversary of the company. Fast forward to 2015, Taylor offers the 614ce in the solid maple back and sides in the 600 Series. It features a Venetian cutaway that provides easier access to upper frets. 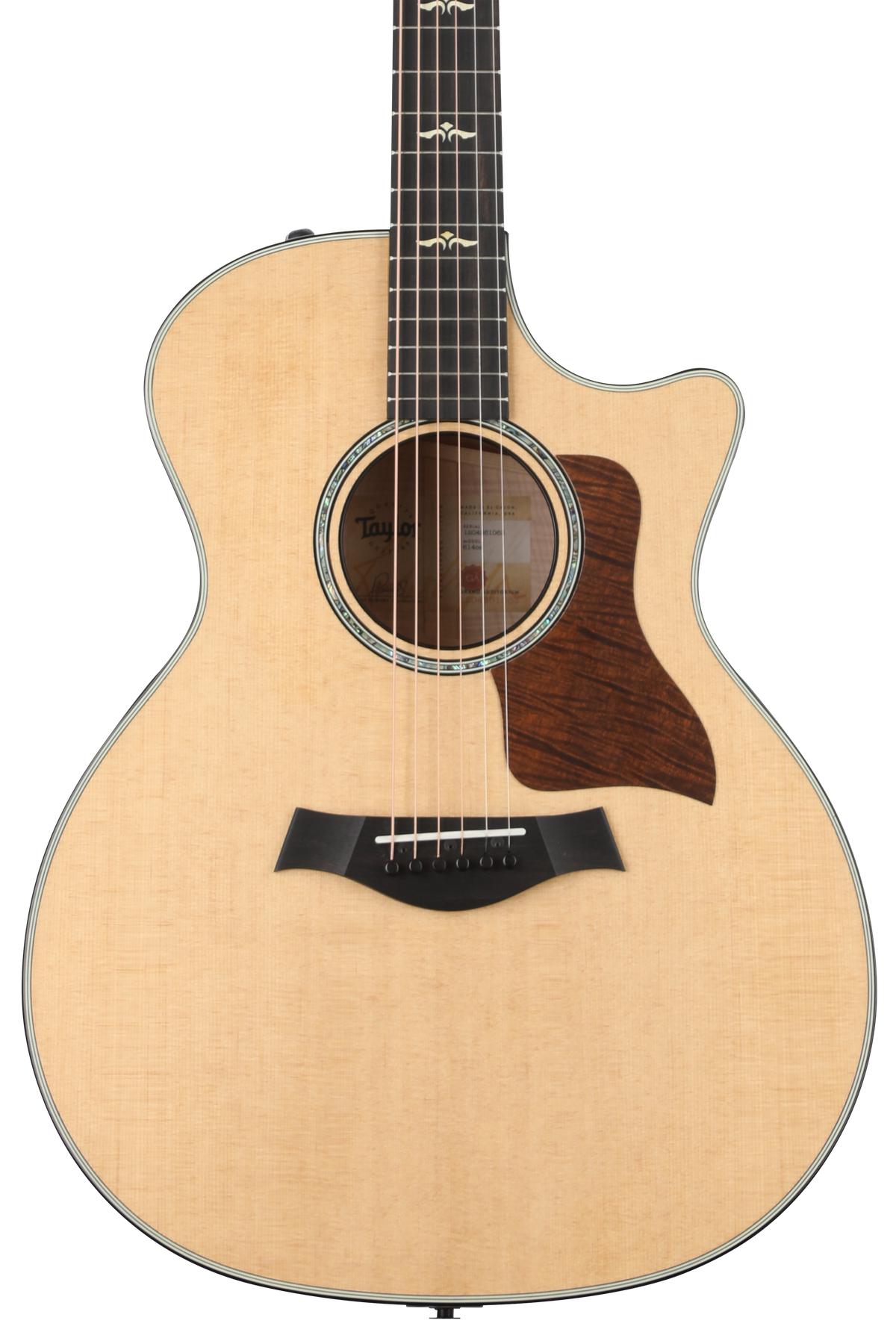 I’ve played cheaper and expensive guitars, but Taylor 614ce has a very inviting maple neck which is stable and straight. Therefore, it provides a more balanced tone, which sounds like a dream. From this point onward, I’m going to share with you everything I like (and dislike) about this guitar.

Taylor Guitars 614ce Grand Auditorium Acoustic Electric Guitar
4.5
CHECK PRICE ON SWEETWATER CHECK PRICE ON GUITAR CENTER
We may earn commission from purchases made from our links, at no additional cost to you.

Hands down to the construction of the Taylor 614ce. It comes with a solid torrefied Sitka Spruce top with solid maple back and sides. “Torrefied” means that the tonewood underwent a roasting process called Torrefaction. This is a thermal process — also used on some Martin guitars — to provide an enhanced resonance, lessens humidity effects, and more-aged hue.

The back and sides are also very interesting. The big leaf tonewood has high-performance properties that are better for onstage productions or recordings. You can see the dark stained tonewood called Brown Sugar, which is prettier than the topwood of other guitars.

This guitar has a Grand Auditorium body, and like other Taylor guitars that feature this body style, it’s great for fingerpicking and flatpicking. The Venetian cutaway, aside from providing a decorative appeal, helps players access the upper frets. It’s among the lightest acoustic-electric guitar weighing only around 4.6lbs.

It boasts a Maple neck that is topped with an ebony fretboard with 20 impeccably-installed frets and the standard scale length. The fretboard is decorated with ornate leaf pearl inlays, which are aesthetically appealing. The neck has width of 44.5mm at the nut and depth of 22mm at the first fret.

Taylor 614ce has a gloss-finished headstock with ivoroid for the Taylor logo and the purfling. The nickel closed-gear tuners and Elixir Phosphor Bronze HD Light strings are purposefully used to extract the optimum performance of the 614ce. You’ll get ebony bridge pins and binding that are actually in perfect quality to keep the strings in place and tightened accurately.

On Taylor’s previous guitars, it has used aftermarket pickups, which aren’t that efficient. So, they decided to design their very own Taylor Expression System. This produces an amplified tone that still has the natural acoustic tone of the Taylor 614ce. In this way, it’s more welcomed by most demanding players and professional guitarists.

The simple onboard controls near the guitar’s heel allow the guitar to boost its beauty without the annoying protrusions to the side. These are easily adjustable controls for volume, bass, and treble. They offer tonal versatility, at the same time, gives a more expressive performance with just a few tweaks of these three knobs.

For some guitars, they have different “sweet spots,” but for the Taylor 614ce its neck is the “sweet spot.” The neck is phenomenal. When you pick up the guitar for the first time, then, begin to play, you’ll achieve a consistent sound — bigger and bolder — across the neck.

The guitar’s neck is satin-finished, easy-to-adjust, straight and can withstand pressures applied on the guitar’s face. The slim profile of the neck, coupled with its rounder and a “V” profile in the lower part gives additional comfort and appeal.

No matter what playing technique you’ve mastered, the neck feels natural in all playing positions. The neck heel is noticeably larger, but it doesn’t feel limiting. Thanks to the Venetian cutaway that helps players access even the 20th fret with ease.

The action is perfectly low, which produces buzz-free performance and there’s also a tuneful intonation throughout. This guitar is noticeably lightweight, so playing from dusk ‘till dawn is just as easy as one, two, three. I mean, moving up and down the fretboard is effortless and less demanding to the fretting hand.

The precise tuning machines onboard help you keep the tune of the guitar even for long hours of playing. The strings, Elixir Phosphor Bronze light, are just perfect to achieve even better sound out of the Taylor 614ce.

Unlike most acoustic-electrics, the controls are placed near the guitar’s heel. Aside from preserving the aesthetics, it’s also accessible and easily adjustable. It gives you an expressive performance, without the need for fancy controls onboard — just the unintrusive volume, bass, and treble control knobs.

The sound is just captivating with more volume and sustain. Period.

Let me start with the V-Class bracing that’s used by Taylor for the topwood. Traditionally, guitars have the popular X-bracing, which has an inherent trade-off between volume and sustain. If you have a stiffer topwood, you’ll get more sustain, but lesser volume. If you design your guitar to have more flexibility on the top, it’ll be louder, but lesser sustain.

With master Andy Powers’ V-class bracing, you can get more volume, more sustain, and better intonation. The Spruce top is flexible enough to produce greater volume, while the bracing maintains the stiffness along the middle (in the direction of the strings) to provide longer resonance before fading out.

Strumming-wise, you’ll get richer and deeper tone, like the materials used to build the guitar. Playing each chord produces amazing sounds with zero overtones.

The sound of the guitar is more of the midrange, but you’ll get a noticeable bass response, too. It has the maple brightness with more clarity across the entire neck. I think the Elixir strings make the difference and help you achieve outstanding sound quality.

Now, when plugged in, you’ll notice a whole new level of tonal versatility. Gone are the days for the body sensors, the Expression System incorporates magnetic sensors — two dynamic sensors underside the soundboard, while a dynamic string sensor beneath the fretboard extension. The former captures the complex nuances of the topwood vibration, while the latter gets the string and neck vibration register.

The onboard preamp will then boost the signal with clarity without distortion or artificial EQ “coloration.” Hence, you’ll get an amplified tone that still conveys the natural acoustics of the guitar.

You’re getting an expensive guitar because you’re either a professional player or someone who is playing your way up so hard. For serious guitarists, it’s better to invest in a durable and long-lasting guitar like the Taylor 614ce. Of, course, if you’re planning to buy one of Taylor’s expensive guitars, you’re likely to perform (or dream to perform) in front of the crowd.

This isn’t like any other guitar. Taylor guitars, particularly the 614ce is well-designed and built to last. So, if you aren’t thinking of playing for long, then, this guitar is surely not yours to pick. It’s too good to become a decorative and to be pushed to the corner of the house. Unless, if you’re that rich to put valuable instruments as ornaments.

Although it’s expensive, it’s a capable guitar — the one that will really push you to level up and bring your performance to the crowd. It has more to offer than its price tag. And, it’s not just to be appreciated by words, but by every strum and pick you do with the guitar.

Taylor Guitars 614ce Grand Auditorium Acoustic Electric Guitar
4.5
CHECK PRICE ON SWEETWATER CHECK PRICE ON GUITAR CENTER
We may earn commission from purchases made from our links, at no additional cost to you.

The Taylor 614ce’s sound quality is a thumbs up, while its playability is a double thumbs up. Perhaps, the reason that this isn’t among the most expensive acoustic-electrics is that it doesn’t have mid EQ controls. You should be thankful for that. Otherwise, you‘ll need to spend more time to save. Kicking all aside, it’s a must-have for serious guitarists.

Orangewood Sierra Review 2022 – Is This Guitar Worth Buying?

If you are looking to display your guitar, there are two widely available options: hanging it suspended on your wall or opting to have...
Read more

Although many people think Ibanez guitars are Gibson and Fender copies, the brand has many noteworthy guitar creations, such as the Roadstar and Iceman. Today,...
Read more

Orangewood Sierra Review 2022 – Is This Guitar Worth Buying?

Orangewood is an independent guitar maker with a duo of brothers as owners based in sunny Los Angeles, California. They offer an uncomplicated shopping experience...
Read more

Fender is one of the leading guitar companies that had stood the test of time and continued to grow and develop their products since...
Read more

C. F. Martin acoustic guitars remain the most respected, sought-after musical instruments of the 21st century. And, why not? Martin has nearly two centuries of unparalleled...
Read more