Seagull S6 vs Yamaha FG730S – Which is The Better Guitar? 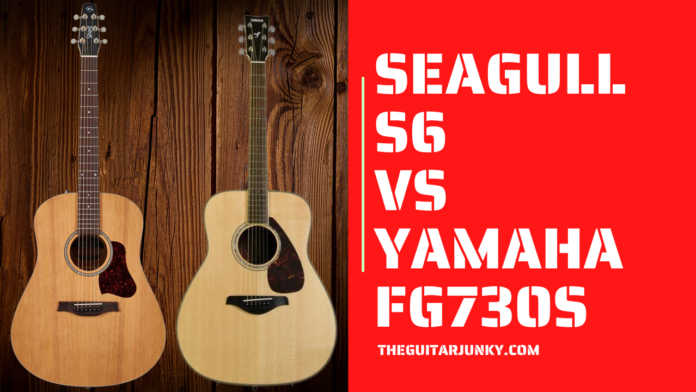 Sitting at almost similar price points, choosing between Seagull S6 and Yamaha FG730S can be tough. Each one can be considered the best in its own unique brand and also has its own advantages each other. Today, we are going to look into an in-depth comparison of these two phenomenal acoustic guitars. Let’s get into it. 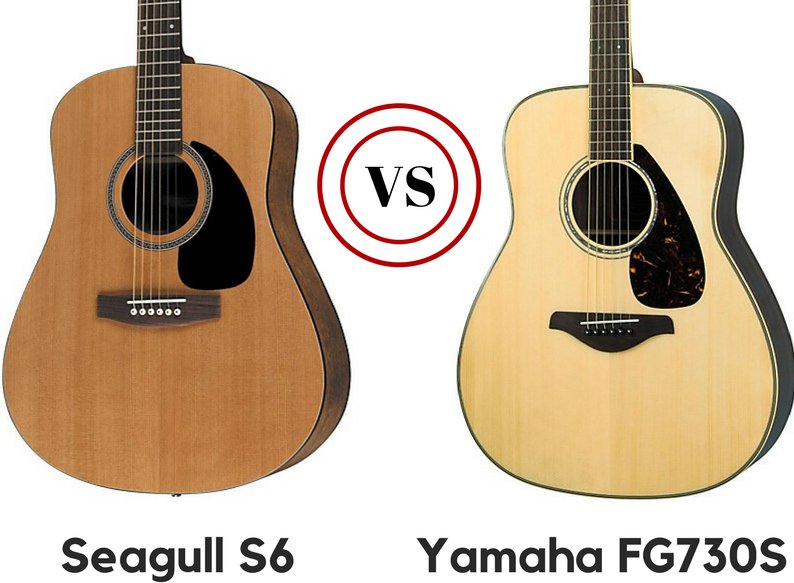 Yamaha FG730S Acoustic Guitar Solid Sitka Top
4.7
CHECK PRICE ON SWEETWATER CHECK PRICE ON GUITAR CENTER
We may earn commission from purchases made from our links, at no additional cost to you.

The Yamaha FG730S belongs to the brand’s most successful guitar series of all time and is a direct upgrade from the 700S and 720. Though it may cost higher than the two previous acoustic guitars, the price is justified by the 730S’ great sound and outstanding craftsmanship.

It comes in Natural, Tobacco Brown Sunburst, Dusk Sun Red, Brown Sunburst, Vintage Cherry Sunburst, and Black finishes which is great for those who want to make their acoustic guitar standout among other common guitars with only a natural finish.

It has a solid sitka spruce top, rosewood back and sides, nato neck(which is common among acoustic guitars), and rosewood fingerboard and bridge. The Yamaha FG730S is regarded for having a great playability.

Though the materials may seem to be common as with other guitars, it has a feature of having a great wood material that makes the guitar sound even better as it matures. Apart from its sound, this acoustic guitar also features a striking appearance brought by the binding around its body that serves as a good contrast making it an awesome guitar.

Seagull S6 Original Acoustic Guitar
4.7
CHECK PRICE ON SWEETWATER CHECK PRICE ON AMAZON
We may earn commission from purchases made from our links, at no additional cost to you.

The Seagull S6, on the other hand is also a phenomenal acoustic guitar. Think about this, most guitars are mass-manufactured outside of US, and who would ever think that a guitar this cheap would sound much like it’s priced at a million bucks? I maybe exaggerating but it’s already considered cheap since it’s made in Canada.

It is the best-selling guitar of Seagull that has a solid cedar top, maple neck, rosewood fingerboard, and wild cherry back and sides. The Seagull S6 has some cool features like having a narrow head stock which is really great as it keeps the tuning intact.

It may not look outstanding in appearance, but the overall material build which produces a great quality sound is what sets apart Seagull S6 original among other common guitars. View our review on Seagull S6.

Here are the detailed specs for each guitar:

Let’s look at how each guitar sound:

A close sound comparison for both guitars:

Judging from the videos above, it’s safe to say(for now) that when it comes to sound, the Seagull S6 original is the clear winner. But hold on, we are just looking at the tip of the iceberg, so let’s get an in-depth review on how each guitar sound.

The Yamaha F730S produces a warm tone yet it strikes a balance with the crisp sound too. When played in fingerstyle, you may notice that it doesn’t sound much but produces an overwhelming sound when strummed. You can almost feel how each of the string screams.

On the other hand, the Seagull S6 produces a loud sound that is also bright and whole at the same time. It produces a lot of low tones as evident when strumming it, yet the sound it almost pleasing to the ears when the strings are plucked.

Both the Yamaha FG730S and Seagull S6 has their own unique advantages and features that both deserve a huge amount of respect. The craftsmanship and playability of each guitar is outstanding given its price point. For those who are still half-hearted, I suggest you go with the Seagull S6 Original, and you can thank me later. And if you’re still undecided to whether which acoustic guitar to choose, here are some takeaways: If you prefer a great-looking guitar that already has a reputation of being able to stand the test of time, choose Yamaha FG730S. It’s a phenomenal acoustic guitar that looks awesome yet also doesn’t sound disappointing either.

Its design may look dull but if you prefer looking more at the guitar’s sound, choose Seagull S6 original. The quality of materials, craftsmanship and sound is so unbearable that it can be considered a bargain already.

Do you find this guitar comparison useful?

Check Out Our Other Guides:

What guitars do you want us to compare? Let us know by leaving your comments below.