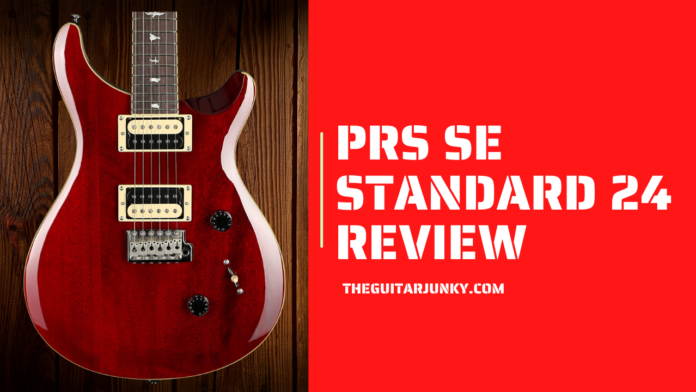 The PRS SE Standard 24 is from the more affordable SE line of Paul Reed Smith electric guitars.  The best thing about this guitar is not only the price tag but its superb playability.

Here, we will review the PRS SE Standard 24 in the Tobacco Sunburst colorway for your consideration. PRS SE Standard 24 Electric Guitar
4.6
CHECK PRICE ON SWEETWATER CHECK PRICE ON GUITAR CENTER
We may earn commission from purchases made from our links, at no additional cost to you. 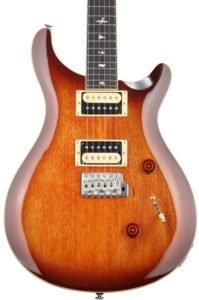 Although part of the Student Edition line of Paul Reed Smith guitars, the PRS SE Standard 24 does not make compromises when it comes to the look and build.

This sleek-looking solid-body electric guitar has a body made of high-quality mahogany that you could see the wood grains of, seeing as the body is only covered in a glossy finish.

It doesn’t hide the instrument’s heart and, at the same time, keeps it classy and vintage-looking.

The all-mahogany aspect of this electric guitar makes it lighter than other Paul Reed Smith guitars like the CE or the Core models.

The SE Standard 24 also has a body that would hug the contours of one’s body when sitting, making all-day practicing and tinkering with your guitar more comfortable.

Overall, the guitar weighs an average of 7 pounds, making it lighter by 2 pounds compared to the Core models of PRS Guitar.

The PRS SE Standard is genuinely perfect as a beginner electric guitar for budding rockstars!

This PRS SE Standard 24’s neck is made of smooth maple, making playing the guitar a smooth and pleasurable experience.

The PRS SE Standard 24 also has a “wide-thin” neck, and this type of neck allows for smooth finger transitions and provides hours of guitar playing comfort.

The fretboard is made of rosewood and adorned with the PRS signature bird inlays.

The fretboard is smoothed down, resulting in a fluid finger transition when playing a chord or doing fingerstyles.

The PRS SE Standard 24, a guitar produced offshore and on the more affordable line, prides itself on bearing the PRS standard 85/15 S Humbucker pickups.

When played, humbucker pickups are characterized by being louder and emitting fuller and warmer sounds, but it also packs a wide range of sounds in its arsenal: from high gains to cleaner and quieter notes.

This pickup is modeled after what Paul Reed Smith himself designed for PRS’ 30th anniversary.

In the headstock are PRS designed chrome tuners.

The PRS SE Standard 24 is for beginners looking to buy a quality first-time guitar that is affordable, but users are always assured that no shortcuts were made in crafting the guitar.

This Paul Reed Smith guitar is also for the professional looking for a perfect guitar to carry around and practice during tours or band practices.

A potential drawback to the PRS SE Standard 24 is that some reports that the electric guitar does not stay in tune.

Some users solve this remedy by adding locking tuners to their guitar’s headstock, claiming that the guitar worked perfectly after.

Some also solved the problem by blocking the tremolo with a piece of wood that cut to fit between the guitar body and the tremolo block.

We recommend upgrading the tuners instead as you move forward with your practice; this could be a permanent solution without chipping your guitar’s body using a piece of wood.

PRS SE Standard 24 Electric Guitar
4.6
CHECK PRICE ON SWEETWATER CHECK PRICE ON GUITAR CENTER
We may earn commission from purchases made from our links, at no additional cost to you.

The PRS SE Standard 24 is a fantastic guitar with many benefits to outweigh its drawbacks.

It is an ideal promotion from a novice guitar and a high-quality one that a beginner would not be able to put down.

This guitar does not only boast incredible playability, a sleek build, and design, but it also has a pretty affordable price tag that a wide array of guitar fans could afford.

The ceramic magnet contributes to the overall tonal balance and versatility of the PRS SE Standard 24 guitars.

A guitar made of mahogany is noted to emit sounds that are warmer and darker sounding, and the ceramic top-end magnets contrast that nicely by bringing a brighter balance to the sound.

At first, both guitars look similar at face value, but the differences are blatant when you start comparing the specs and the material used in the construction.

It’s worth noting that there is almost a $200 difference in price, with the PRS Custom 24 being more expensive because of the higher-quality materials used to craft the electric guitar.

The Custom 24 has a maple top and a mahogany body, while the Standard 24 has an all-mahogany body.

The Custom 24 also has more rigid playability that might be intimidating for beginner players.

Check out our comparison on custom 24 vs standard 24 here.

Can you play metal in the PRS SE Standard 24?

Humbucker pickups are characterized by the big, warm, and loud sound they emit; they are more famous for being utilized by heavy rock and metal players as their primary genre, so yes, you can play metal in a PRS SE Standard 24.

Although, there is a PRS SE electric guitar made specially and designed by and for the needs of Mark Holcomb, who you might know as the lead singer for the heavy metal band Periphery.