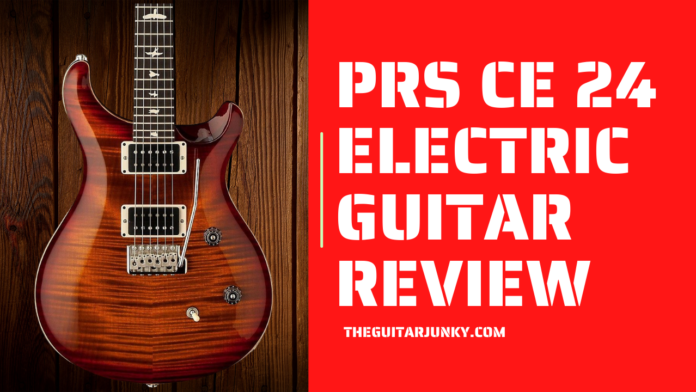 It is a bolt-on neck electric guitar that offers a sleek vintage feel and looks with gorgeous clear and snappy sounds.

Here, we review the Paul Reed Smith Classic Electric 24 and see if this guitar is justified by its reasonably high price tag. 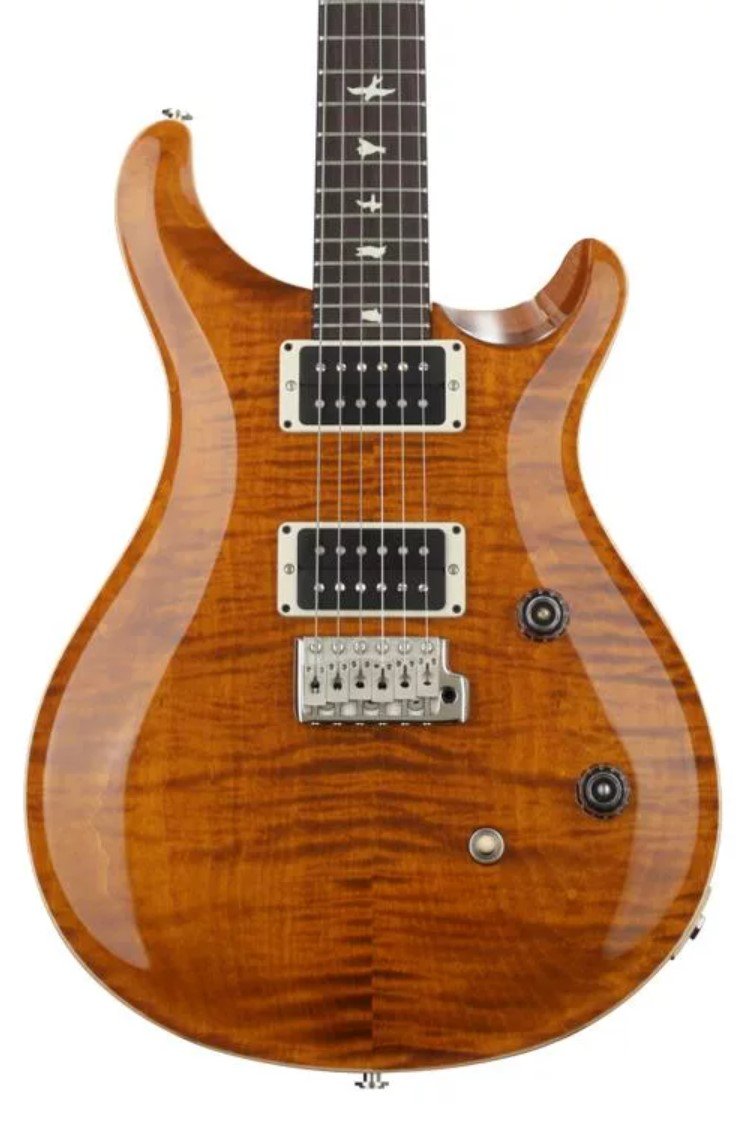 The Custom 24 is an American-made PRS guitar using the best quality woods that are PRS’s traditional go-to: an elegant maple top and soft mahogany back.

It also has a carved top to hug the body’s contour for hours of comfortable practicing and playing.

The thinner body of this PRS electric guitar would also add to the excellent feel of this guitar that you would not be able to put down; it is the perfect feature for your forearm to rest comfortably as you strum and tinker with the guitar.

The guitar luthier took cues from the PRS Core models to provide the finishes for the Classic Electric 24— polishing the maple with high-gloss nitro above a cellulose CAB basecoat.

The final product is a smooth, thin, enduring, marvelous-looking guitar that would last you a lifetime with the proper care and upkeep.

A nostalgia aspect for fans of the original PRS Classic Electric guitar released in the ’80s and the early 2000s is the comeback of the classic bolt-on neck for the current line of PRS CE 24 electric guitars.

It essentially means that the PRS CE 24’s neck is screwed on the body and not glued on.

The bolt-on neck can also affect your electric guitar’s sound as it gives it a brighter sound than the richer lows of the set necked electric guitars.

The neck on this guitar features the PRS Pattern Thin neck, formerly known as the Wide Thin neck.

It has slightly softer shoulders that guitar players would feel a difference; it will feel like you’ve been playing this guitar for years.

The asymmetry of the CE 24 will also allow you to reach upper fret notes easily.

The fretboard on this electric guitar is made of East Indian Rosewood inlaid with the iconic PRS bird.

It is so smooth that finger transition between chords, strumming, or fingerstyle is done seamlessly and without a hitch.

This Paul Reed Smith features an updated 85/15 “S” pickup that could sound like the warmest humbuckers tones and lets you split to a bright and snappy single-toned sound with a push/pull tone control also a 3-way toggle switch to bring out six sounds.

You can start with a humbucker and sound like the ’70s, and 80’s hard rock and metal scene to switch coils to mimic the sound of bright ’60s pop-rock guitar.

The bridge of this electric guitar is the PRS patented molded tremolo that effectively adjusts the guitar’s audio signal.

The tuning keys in this guitar are reliable and maintain the guitar’s tune even after prolonged use.

There is a pickup selector, the master volume, and tone knobs on the body that works without a hitch.

The Paul Reed Smith Classic Electric 24 are for professional electric guitar players to use on tour alone as the guitar not only plays heavy rock and metal, but it’s also versatile for jazz and blues. Because of the pull/push switch that could easily switch the guitar to emit single coiled sounds.

The electric guitar is also for the die-hard PRS Guitars fan as the guitar is an excellent addition to their collection.

The PRS CE 24 is also for people ready to transition to a pro-level guitar from their intermediate instrument.

A potential drawback to this premium guitar is the pretty high price tag.

The reason is that you pay for what you get: premium electronics and hardware, a sleek-looking instrument using the highest quality materials, and American-made craftsmanship.

No shortcuts were taken in developing and crafting this electric guitar, which shows in its excellent looks and superb playability.

The PRS CE 24 is a high-end guitar that can justify its price with how the electric guitar looks and sounds.

The guitar’s aesthetics, like the neck and the body features, make it look good and provide extreme comfortability and pleasure when played.

Guitar connoisseurs and enthusiasts would agree, the Paul Reed Smith Custom 24 is on par amongst the high-end Gibson Les Paul and the Fenders.

Can you identify the bird’s inlaid on the guitar’s fretboard?

Birds are significant to Paul Reed Smith because his mother used to be a birdwatcher, and his sibling and Paul himself used to watch birds with her.

What does the PRS Classic Electric use? A molded or a machined tremolo? What is the difference between the two?

The difference is in the name itself, as one is molded and the other machine-made.