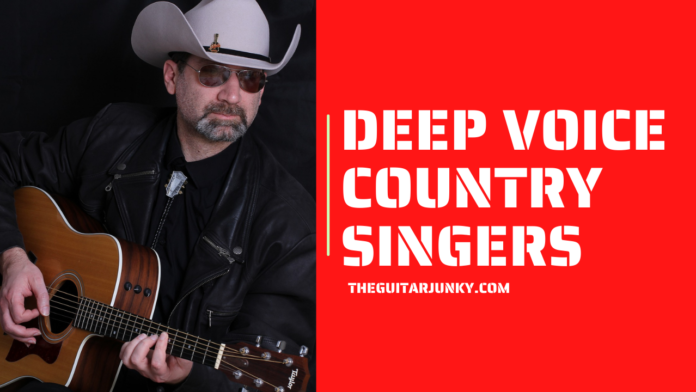 Country music is filled with rich beautiful voices that soothe listeners with their music; from grandmasters to would-be legends, many country singers have commanded live performances with their irresistible deep voices.

Narrowing down a list of great country baritones is no easy task; it may not be definitive but this list documents some of the best deep voice singers the genre has to offer.

Without further ado, here’s a list of country singers with captivating deep voices:

We start the list strong with Johnny Cash, the first on Musician Wave’s 10 Country Singers With Deep Voices, and many other lists.

Born J.R. Cash, this great musician made a name for himself with his deep, calm, bass-baritone voice coupled with his somber tone.

Known as “The Man in Black” due to his trademark all-black performance attire, a contrast to cowboy boots and rhinestone suits expected of country singers, he became the embodiment of the rebel spirit; he was an outlaw who mourned for ‘lives that could have been’ and wore black for the poor and downtrodden.

Even with his drug addiction and multiple brushes with the law, he campaigned for diverse causes like prison reform, civil liberties, and Native American rights; he recorded a concept album entitled Bitter Tears: Ballad of the American Indian which featured songs about the struggles of Indigenous people, and he performed concerts at Folsom Prison and San Quentin State Prison.

Born as Wayland Arnold Jennings, the next unforgettable deep voice in our list is best known for being a founding pioneer of the Outlaw Country movement; ironically, he didn’t want anything to do with the popular country music subgenre.

Jennings started his career as a member of The Crickets, the backing band for Buddy Holly; his fame became widespread in the 1970s through the acclaimed compilation album entitled Wanted! The Outlaws which became the first country music album to be certified platinum.

Ranked first in Rolling Stone’s 100 Greatest Country Artists of All Time, Merle Haggard is a multi-awarded chart topper whose career spanned from the 1960s until well into the 2000s.

Born in California during the Great Depression, he lived through prison, poverty, and heartache which became themes he sang about throughout his career.

Considered a bad boy, he once said that he would’ve been a criminal for life had he not found music; he was in and out of institutions and was even incarcerated in San Quentin before he began his recording career in 1962.

With his signature rich deep baritone and Fender Telecaster, he helped shape the Bakersfield Sound; with hits like 1966’s “I’m a Lonesome Fugitive” with the Strangers to 1987’s “Twinkle, Twinkle Lucky Star” he had 38 number-one hits on the U.S. Country Charts.

He seamlessly weaved gospel songs with neo-traditionalist ballads to create songs like “Deeper Than the Holler”, “Forever and Ever, Amen” and “I Told You So” which are all considered to be significant country songs.

He recorded 20 studio albums, among them several platinum and diamond certified; one of which is his Always and Forever album that hit the top 20 on the Billboard 200 and topped the Billboard Country Albums Chart for 43 weeks.

He had 16 number-one hits on the Billboard Charts before suffering a stroke in 2013 which cut his singing career short.

His final performance was at his own induction to the Country Music Hall of Fame in 2016 wherein he performed “Amazing Grace.”

With one of the most familiar stage names, Conway Twitty whose real name was Harold Lloyd Jenkins serenaded audiences with his smooth voice.

He started his career in the 1950s dabbling into R&B, rock, and pop where he found some success with songs like the Elvis-imitation ballad “It’s Only Make Believe.”

He switched to his true passion, country music, where he found tremendous success as a solo artist as well as a duet with Loretta Lyn with whom he had several Country Music Association Awards from 1971 to 1976.

With songs like “I’d Love to Lay You Down”, “She’s Got a Single Thing in Mind”, “Linda on My Mind”, and “How Much More Can She Stand (and Still Stand by Me)” he had 40 number-one hits on the Billboard Charts.

Next on our list is Scotty McCreery whose win on the tenth season of the talent competition American Idol in 2011 jump-started his music career.

This relative newcomer charmed listeners with his astonishing deep voice as shown by his debut album Clear as Day becoming platinum-certified; this album included “The Trouble with Girls” and “I Love You This Big”, both charting in the top 20 country songs.

In 2012, he released a Christmas album that included nine-holiday classics as well as two new songs entitled Christmas with Scotty McCreery which became gold certified.

With the release of his fifth studio album Same Truck with the singles “You Time” and “Damn Strait in September 2021, he’s well on his way to becoming one of the best country singers of his generation.

This highly celebrated musician has a beautiful baritone voice that made him a success from the beginning of his career in 1996 with the release of his debut album Dreamin’ Out Loud.

Since then, he’s released around ten studio albums and two Greatest Hits compilations from which more than 20 singles have charted on the Billboard country music charts; some of these are “(This Ain’t) No Thinkin’ Thing”, “Every Light in the House is Home”, “Ladies Love Country Boys”, “You’re Gonna Miss This”, and “Honky Tonk Badonkadonk.”

His albums have sold eleven million copies with his 2005 release Song About Me becoming certified 2x platinum; he has also racked more than two billion streams, showing that he’s not ready to slow down even after more than three decades.

From 2003 up to the present, he has released nine studio albums with multiple songs charting such as “Your Man”, “Would You Go With Me”, “Firecracker”, “Why Don’t We Just Dance”, and “Time Is Love”; of all his albums, Long Black Train, Everything Is Fine, and Haywire are some of his most successful having gold certification while his second album Your Man is platinum certified.

Another newcomer, he began his career as a songwriter for other musicians like Kenny Chesney, Carrie Underwood, and Darius Rucker; he also became a singer for multiple bands before his solo career took off in 2015.

We move on to Alan Jackson, an award-winning neotraditional country artist who has written most of his songs.

With an impressive deep voice, he has recorded 16 studio albums, 2 gospel albums, 2 Christmas albums, and 3 Greatest Hits albums which helped him become one of the best-selling artists of the genre with over 75 million records sold worldwide.

He has also won multiple accolades such as Album of the Year for The Bluegrass Album in 2014’s Golden Boot Awards, Best Country Song for “Where Were You (When the World Stopped Turning)” during 2002’s Grammy Awards, and Favorite Country Album for A Lot About Livin’ (And a Little ‘bout Love) on 1993’s American Music Awards.

With that, we conclude our list of 10 Deep Voice Country Singers.

There are a lot of great country singers with great baritone voices that we surely missed some of your favorites.

Let us know what you think in the comment below!