Its guitars are US-made, so expect a higher price.

Yet, it also has guitars made overseas, particularly in Korea and China.

Its Solo Concert acoustic-electric guitars, for example, has cheaper counterparts made from Korea and China.

We’ll review the US-made model of the guitar with a second soundhole on the side.

A soundhole to the side? Maybe you are confused and find it rather awkward. However, Breedlove has its reason and it’s a valid one.

We’ll explore more about the Solo Concert below. 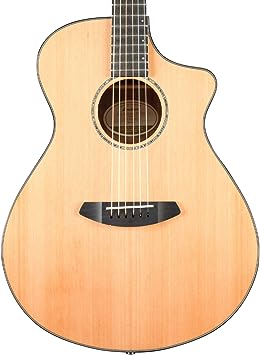 Breedlove SOLO CONCERT Acoustic-Electric Guitar Natural
4.5
CHECK PRICE ON SWEETWATER CHECK PRICE ON GUITAR CENTER
We may earn commission from purchases made from our links, at no additional cost to you.

American-made Solo Concert is crafted with excellence. No questions or doubts about that.

The model that I have comes with a solid Western Red Cedar top, Ovangkol back and sides and African ebony fretboard and bridge.

The top has a glossy finish which the honey-colored grain of the Cedar looks so lovely.

Just a side note, older Solo Concert was made of Indian Rosewood instead of ovangkol and ebony.

However, Breedlove found that the African ebony has the same specific gravity as the rosewood and it’s a great fretboard and bridge material, too.

This guitar has a concert body type with a soft single-cutaway.

This is perfect for accessing the upper frets, even for smaller hands.

This guitar weighs around 14.3lbs, which is pretty standard for a guitar of this type.

The glued-in neck is made of Mahogany with a C-shaped profile and satin finish.

As I mentioned, it has an African ebony fretboard with 20 frets and the standard 25.5-inch scale length.

It features offset dot inlays, which I find a bit weird, but are just small enough not to get all the audience’s attention.

This has a rather pointy headstock, that if you’re playing with a capo, it won’t clip there temporary when not in used.

Yet, it has chrome closed-gear tuners and a pinless ebony bridge that do their job well.

The L.R. Baggs electronics onboard is an undersaddle pickup with soundhole-mounted controls.

The problem with soundhole-mounted controls is the difficulty of tweaking the controls while playing.

While the main soundhole has Abalone ring rosette, the second soundhole doesn’t have any inlay.

It took me a while to mention the second soundhole, but, it’s the highlight of the guitar’s design.

It’s a unique soundhole near the input jack, which functions as a monitor, especially when you’re playing in front of the crowd.

The design doesn’t affect the sound, resonance, and stability of the guitar.

It’s indeed a very clever feature to give the players an idea on how they sound in front of their audience.

The second soundhole doesn’t affect the playability in any way.

Maybe it’s kind of awkward at first, especially if you’re not familiar with this kind of design.

It took sometime before I finally able to overlook the second soundhole and doesn’t care about it at all.

Playing the Solo Concert is simple, just like playing any acoustic guitar.

The single-cutaway and C-neck profile offer great playability of the guitar.

The ebony fretboard is very comfortable to play and can take on different playing styles.

The action of the guitar is quite high and it takes time to lower down to about 0.55mm at the first fret.

In my case, the setup is quite challenging, but I am excited to listen to how it actually sounds, given that it’s my first time playing this kind of guitar.

I can’t speak for other models because it might be due to various conditions during shipping.

The closed-back chrome tuners are smoother and easier to tweak.

Though some professional players are changing to open-back tuners, in my experience (with this guitar), I think I can get the tuning more accurately with the stock tuners.

The D’Addario EXP 16 need no replacement because they are already great.

The pinless ebony bridge offers great soundboard stability, at the same time, makes it easier to replace the strings.

Tuners are great to keep the guitar in perfect tuning, so you can play longer without the annoying detuning.

Overall, this guitar is best to accommodate both strumming and fingerstyle.

The soundhole at the side efficiently projects to you the sound it delivers to your audience.

It’s easy and fun, so even though it might be a bit challenging for beginners to play, it’ll surely keep them playing.

This is the most thrilling part — the sound.

If not with the second soundhole, Solo Concert seems like another acoustic-electrics out there with an expensive price tag.

Aside from the sound of the tonewood being used, this guitar has an interesting sound quality — which can be heard even without plugging in.

Of course, the cedar top is usually associated with warmer and fuller sound with brilliance and clarity.

While the Ovangkol back and sides offer more emphasis on the bass.

So, the cedar/ovangkol combo gives you clear and balanced sound quality.

This unusual design primarily benefits those who are playing in the group or a large and noisy crowd.

Likewise, it’s perfect for songwriters and composers to know how their music actually sounds, not the amplified version, but the real tone of each chord you strike.

Though this is not as powerful as a dreadnought guitar, it offers big volume, especially when plugged in.

Solo Concert is made by the top-notched luthier in Oregon, so, you are assured of its quality.

Even though it’s a bit expensive, it’s still worth the price.

I don’t recommend this to beginners or those who are just starting to appreciate the beauty of playing guitar — this might turn you off.

But, if you’re playing with a group or an intermediate player who performs in front of the crowd, this is such a great instrument.

The ability to listen to your music directly while you’re playing gives you real-time feedback on how you sound.

Additionally, the tonewoods used are among the best woods used even on high-end guitars.

Breedlove SOLO CONCERT Acoustic-Electric Guitar Natural
4.5
CHECK PRICE ON SWEETWATER CHECK PRICE ON GUITAR CENTER
We may earn commission from purchases made from our links, at no additional cost to you.

Breedlove Solo Concert isn’t an easy-to-use guitar, especially if you’re playing it for the first time.

It requires a bit of setup, particularly in lowering the action. However, once the action and tuning are set, this guitar turns out to be brilliant.

The single-cutaway and the C-shaped neck is perfect to accommodate fast play and easier access to the upper frets.

The cedar top and the ovangkol back and sides are just great tonewoods to get more projection and balanced tone.

Again, the second soundhole is really the game-changer. It’s the one feature that separates the guitar from the rest!

GET THE BREEDLOVE SOLO CONCERT ON NOW.

9 Best Acoustic Guitars for Kids in 2022

Yamaha FG800 Review 2022 – Should You Consider Getting This Guitar?