10 Best The Police Songs of All Time 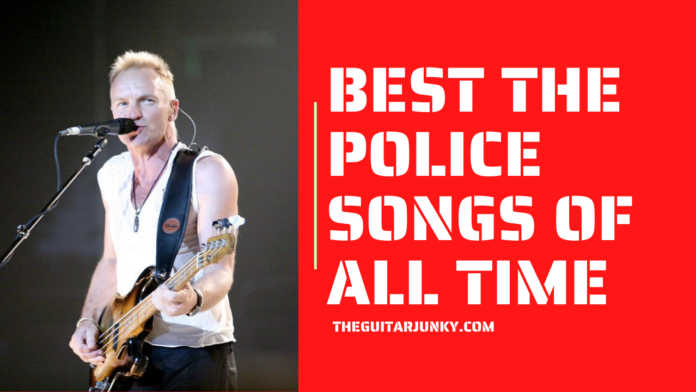 The 1980s was, I would dare say, the golden age for pop-rock and punk rock, with artists like The Police dominating the charts of not only the US, but other nations as well in that time.

The best “The Police” songs are those that made it to the top in the charts and withstood the test of time, still gaining millions of streams from then non-existent platforms like Spotify and Apple Music.

Though being a little aged now and being disbanded a couple of years ago, The Police songs are still songs that we enjoy, even with the dawn of new music from indie rock artists to modern pop-rock artists.

Here are the top ten best songs of The Police, all of which have, as mentioned, stood the test of time and still gained millions of listens on online music streaming platforms.

Wrapped Around Your Fingers  (Synchronicity, 1983)

Being the 9th track on the blockbuster album “Synchronicity”, the song features a slow and mellow reggae intro with a slight hint of rock in the chorus and later in the song, a feat which The Police is quite known for.

The song speaks about the power struggles that occur in relationships, where most often the partner has somewhat more control of the relationship than the other, figuratively wrapped around their finger.

Sounding a bit more of a mix of rock, reggae, and pop, the 8th track “King of Pain” on the album “Synchronicity” is a song where Sting is free to put all his emotions into words.

The spot on the sun is what Sting uses as a metaphor for a low point in his life, and as the spots get more and more frequent, so do the low points in his life, inciting him to dub himself as the king of pain.

“De Do Do Do, De Da Da Da” appears as the 7th track on the highly successful album “Zenyatta Mondatta”, The Police deliver a wonderful message to both the public and musicians.

The nonsensical title is actually proof of the message itself, as The Police want everyone to know that words often lose meaning when they’re too extravagantly written, and that using simpler, more understandable words deliver the message in the best way possible.

After getting drunk post-concert in Munich, Sting starts singing the lyrics to the later hit-song “Walking on the Moon”, appearing on the 1979 album “Regatta de Blanc”.

The song basically describes what one feels like being in love; almost weightless and thinking that anything that is possible is achievable, a feeling that quite a lot of us can easily be familiar with.

The song was the second single by The Police to reach No. 1 in the UK Singles chart, and peaked at No. 9 in Australia and No. 1 in Ireland.

The second track on the album “Outlandos d’Amour” signified the first experimental fusion of reggae and punk music by the Police, which quite obviously speaks about the feeling of loneliness after experiencing heartbreak.

It reached No. 6 in the UK, only No. 7 in Ireland, and not even placing in the US charts, which is somewhat expected of the time especially since the reggae-punk mix was completely new to many at the time.

The first track on the album “Zenyatta Mondatta”, “Don’t Stand So Close to Me” is known as one of the most popular songs by The Police, as it speaks about a student-teacher relationship, considered to be a taboo or illegal in some countries.

The song was the third song to reach No. 1 in the UK singles chart and was entitled “Best Selling Single of 1980” in the same country, leading the band to win a Grammy Award for Best Rock Performance by a Duo or Group with Vocal in 1982.

Every Little Thing She Does  Is Magic (Ghost In the Machine, 1981)

Originally performed by Sting before the formation of The Police, “Every Little Thing She Does Is Magic” is not your average love song, as it comes in the unique reggae-rock music that is very specific to the band.

The song topped charts as number 1 in six different countries, and peaked at No. 3 in the US Billboard Hot 100.

This award-winning single from the second album by The Police sings about the despair and loneliness one can feel following a heartbreak or just being alone in general, but also gives hope to those who feel so by reminding them that they are not alone.

This track was the first-ever song to stand on No.1 in the UK singles chart, and Rolling Stone gave it No. 65 on “100 Greatest Guitar Songs of All Time”.

“Roxanne” is the 3rd track on The Police’s “Outlandos d’Amour” album and sings about a hooker who Sting tries – with all his might – to convince her to change her “dirty” ways.

30 years after its release, in 2008, “Roxanne” was inducted into the Grammy Hall of Fame, despite only peaking at No. 12 in the UK singles chart.

Every Breath You Take (Synchronicity, 1983)

Every Breath You Take is the most famous piece by The Police, and is mistaken for a love song when it’s really about a stalker who is obsessed with the person they admire, constantly watching them and all that they do.

This multi-award song topped the US Billboard Hot 100 for 8 weeks and was nominated for three Grammy Awards and won Sting the 1983 Ivor Novello Award.

The Police doesn’t fall short of being an iconic rock band of the 80s despite the members going their separate ways after some internal tension.

This band revolutionized the sound of rock music forever, as they incorporated hints of surprising reggae, occasional pop, and classic punk into the genre.

Though they didn’t last as long as the fans and the world may have  wanted them to, they still left a great legacy for the musicians who seek to be as revolutionary as they were.