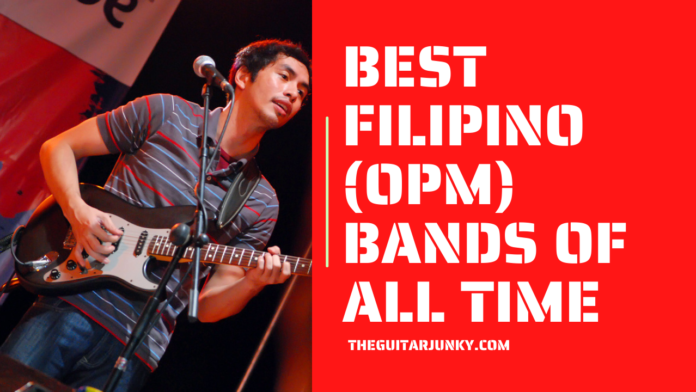 Original Pinoy Music (OPM) emerged in the mid-70s and since then has become prominent in the music scene.

Particularly the 90s was the most prolific of all eras in Philippine’s music history, especially with the explosion of OPM alt-rock dominated by the most popular Filipino bands.

But which are the best Filipino OPM bands of all time?

We’ve listed them in this top 10, so if you’re ready, let’s get started.

Most 90s kids would recall this band – especially their much relatable songs, like “Huling El Bimbo,” “Magasin,” and “Pare Ko.”

Undoubtedly, it is one of the most successful OPM bands in Philippine history; in fact, it’s sometimes called the “Beatles of the Philippines.

The band was formed in 1989 and is known for genres pop, alternative rock, OPM, and experimental music.

E-Heads, as fans call them, is known for a multitude of hits, also including “With a Smile,” “Ang Huling El Bimbo,” and “Spoliarium.”

Nevertheless, Eraserheads left a legacy and became known as one of the most successful bands of all time and is credited for leading the 2nd wave of band invasions in Manila.

They also paved the way for the rest of the Filipino al-rock bands.

Rivermaya, which is known in genres like pop-rock, alt-rock, hard rock, standard rock, and progressive music, was formed in 1994.

They’re also considered as one of the bestselling OPM bands in the country.

Like Eraserheads, they’re one of the most influential OPM bands of all time that most 90s kids would recall especially their hits that include “Elesi,” “Hinahanap Hanap Kita,” “You’ll Be Safe Here,” “Himala,” Kisapmata,” and “214.”

It’s one of the best selling artists in the country.

The band is currently composed of original group members Nathan Azarcon and Mark Escueta along with Mike Elgar, their longest-serving guitarist.

Known as an icon of the People Power Revolution, Yano is another great band of the Philippine music industry that formed in 1992.

Their name, Yano, means “simple,” in Tagalog and is commonly used in the province of Quezon.

Who else doesn’t know lead vocalist Dong Abay and his unique singing style?

In 1997, Abay left the band. He struggled with depression, and this condition made him stop performing for a while.

When he recovered from it, he formed Pan, a new band; however, it was short-lived because he decided to pursue and finish his studies later.

Their songs about Philippine society and politics are still worth a listen and applause.

Formed in 1993, Aegis, which means protection/shield, is an OPM band known in genres like adult-oriented rock, progressive rock, and Pinoy rock.

Due to their songs’ popularity, they’ve been featured in “Rak of Aegis,” which is the longest-running jukebox musical in the country.

It’s the only Filipino band that released albums in the United States and Japan.

Some of their most popular songs are “Sandata,” “Ang Halik ni Hudas,” and “Mata Ng Diyos” and albums include ‘Wolfgang’ (1995) and ‘Ang Bagong Dugo Sa Lumang Ugat—Unang Kabanata’ (2012)

Often compared to the likes of Slipknot, Limp Bizkit, and Korn, Slapshock is known for combining heavy metal and hip-hop that satisfies the appetite of their audience that loves rap-rock and brutal music.

The group formed in 1996, originally as a rap-metal act.

Members Munsayac, Ansing, and Nadela met when they were in college, as they’re studying at UP Diliman.

However, they wanted to change their sound, so they recruited Jamir Garcia to replace Munsayac. Garcia, by that time, had returned from the US and was familiar with hardcore rap style on the East Coast.

Their songs kept dominating the country’s music scene, especially with the release of “Project 11-41,” (2002); this album displayed the group’s melody and signature style.

It became one of the most commercially successful albums of that year, with the band being voted at the NU 107 Rock Awards as “Artist/Band of the Year.”

However, Lee Nadela, their bassist, announced that they split in October 2020.

Even worst, Garcia, on November 26, 2020, committed suicide by hanging and was found dead in his home.

A Filipino pop-rock and folk-pop band, Ben&Ben formed in 2015.

Since their launch, they’ve been known for their songs, including “Lifetime” and “Pagtingin.”

“Limasawa,” their debut studio album, is a three-platinum album as certified by PARI for selling 45,000 copies.

There is no doubt that this band is one of the most famous acts in the country today, and in fact, also one of the most-streamed Pinoy artists on the international streaming service, Spotify, in 2020.

It’s known to be the first-ever to achieve commercial success in the Philippines history of rock bands during the late 1980s.

However, their lead vocalist, Jett Pangan, formed “The Jett Pangan Group,” in 1995, so the band split.

In 1999, the Dawn, which is taunted as the most prolific rock band in the country, reunited.

Popular in genres, such as pop-rock, alt-rock, experimental, pop-punk, rap, novelty, funk, and OPM, Parokya ni Edgar, which was often called “The National Band of the Philippines,” formed in 1993.

It’s a famous rock band that is loved by fans for its novelty, pop, and rock songs.

Known in genres like hard rock, pop-punk, alternative rock, OPM, and hardcore punk, the band was formed in 2000, and since then has made a name in the OPM industry.

As even if some would find their music vulgar, a lot of fans still love their songs.

Which among these Filipino bands is your favorite of all time? Tell us in the comments. Finally, share and spread the word about this post on social media today!