You can never have too much rock ‘n roll. Using distortion pedals drastically changes (in a good way) how your solos sound. Distortion pedals are heaven-sent for musicians that want complex and rich sound with intense overtones, creating an overall killer sound.

Most of the well-known artists and legendary musicians use distortion to improve their solos. If you’re in a Metallica or Slipknot concert, best believe you’ll be seeing a distortion pedal or two.

Planning to achieve a heavy metal vibe the easiest way? Below are the 7 best distortion pedals this 2019. 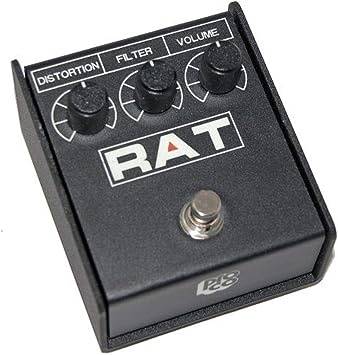 Pro Co RAT2 Distortion Pedal
4.7
CHECK PRICE ON SWEETWATER CHECK PRICE ON AMAZON
We may earn commission from purchases made from our links, at no additional cost to you.

With its history and iconic status, the line of RAT distortion pedals have become a standard to other models.

Flaunting its versatility, the RAT2 covers a lot of ground from heightened overdrive to full-on intense fuzz distortion. Even though its primary use is to produce distortion, the RAT2 does a great job in producing rhythm tones, soaring leads, and sparkly clean to warm overdrives. Craft your tone like no other with the RAT2. 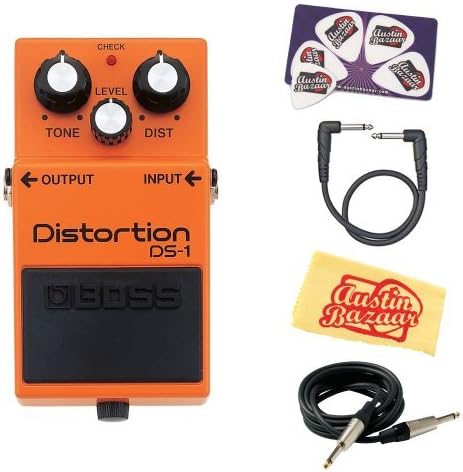 Boss DS-1 Distortion Bundle
4.7
CHECK PRICE ON SWEETWATER CHECK PRICE ON AMAZON
We may earn commission from purchases made from our links, at no additional cost to you.

Achieve a grungy mood for your tracks the smoothest way possible with the Boss DS-1 Distortion Pedal. Controls like Tone, Level, and Distortion are what you’ll find on the surface of the pedal. Whatever your setting is, the pedal maintains its tight, compressed and bold voice.

Known to have a great deal of high compression, the DS-1 fills your performance with more gain and more sound. With modifications of each of the three knobs, you’ll get a range of different tones—proving that the DS-1 is perfect for all flavors of rock. Both easy to use and affordable, the DS-1 is a great pedal for beginners to start with. 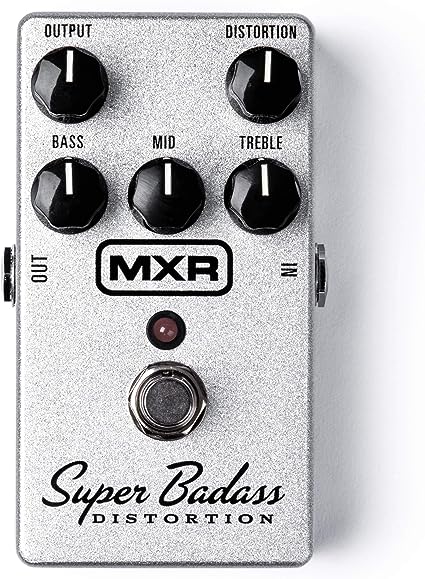 MXR M75 Super Badass Distortion
4.6
CHECK PRICE ON SWEETWATER CHECK PRICE ON AMAZON
We may earn commission from purchases made from our links, at no additional cost to you.

As its name suggests, the MXR M75 Super Badass Distortion will give you some pretty badass boosts and distorts to your solos with a considerable amount of gain.

It features a three-band EQ which would make a very noticeable difference one you start tweaking the tone. Get your imperfect techniques sorted out with just a tweak of the EQ.

The M75 Super Badass gives some overdrive goodness to full-on hyped up distortion. It displays an easy and straightforward design with the distortion, bass, mid, and treble controls to fix your tone. 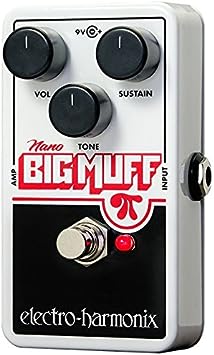 Electro-Harmonix Nano Big Muff
4.5
CHECK PRICE ON SWEETWATER CHECK PRICE ON AMAZON
We may earn commission from purchases made from our links, at no additional cost to you.

Electro-Harmonix is a household name when it comes to all things distortion and overdrives. That’s why the Nano Big Muff Distortion Effects Pedal would really handle your solos and techniques very well by giving it the extra kick it needs.

Ranging from a gentle overdrive to a very crunchy distortion, the Nano Big Muff is a force to be reckoned with.

It features three controls enclosed by a heavy duty construction. The pedal offers a lot of range and large amounts of gain. The Nano Big Muff is also loved by a number of beginners which goes to say that it’s very easy to use and has a simple layout. 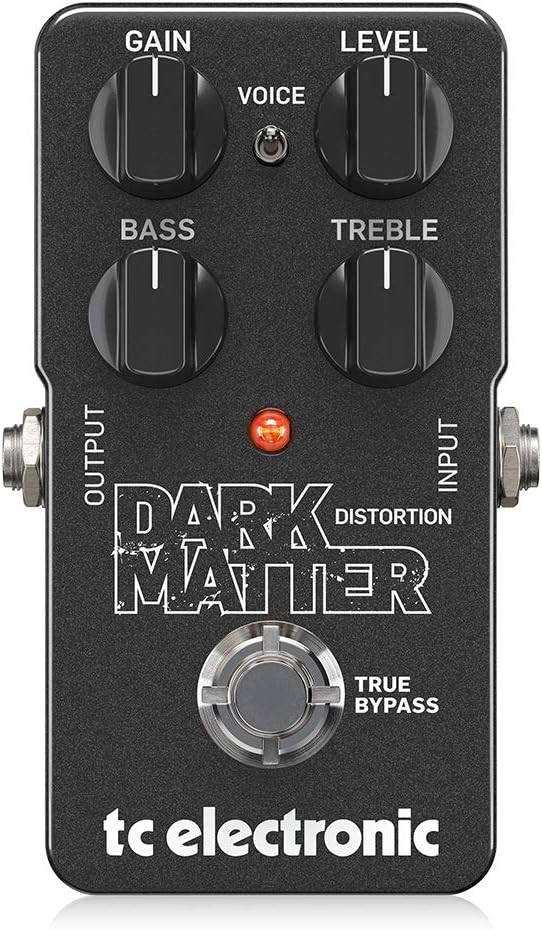 TC Electronic Dark Matter Distortion Effect Pedal
4.4
CHECK PRICE ON SWEETWATER CHECK PRICE ON AMAZON
We may earn commission from purchases made from our links, at no additional cost to you.

Shape your technique by covering it up with mild to crunchy distortion tones using the TC Electronic Dark Matter Distortion Effect Pedal. This pedal offers low compression and the smoothest tonal break-up. It was meant to belong between a strong overdrive and light distortion.

Featuring two active EQ controls, Gain, and Level knob, the Dark Matter is very easy to work with. Each tweak of the knob and control will lead you to another level of intense. Adjust to the dirt level of your liking, play with the “Voice” switch, and you’re well into crunchy modern rock territory. 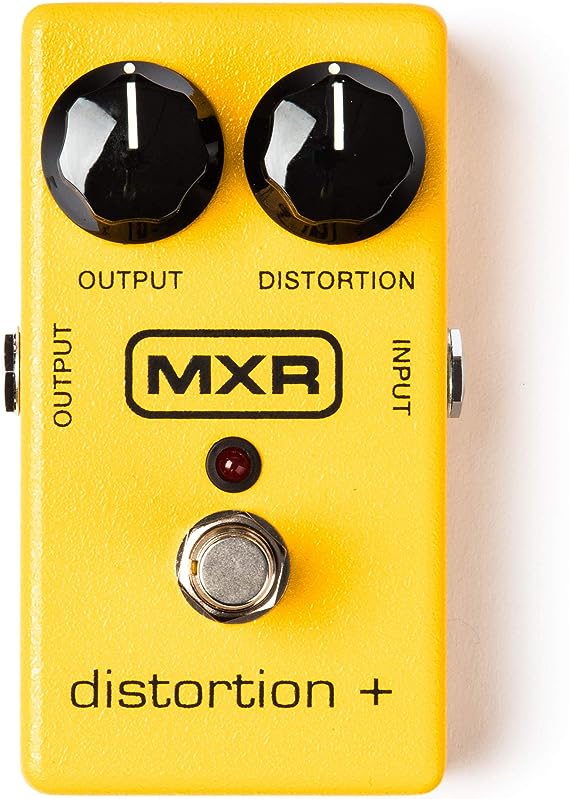 MXR M104 Distortion +
4.4
CHECK PRICE ON SWEETWATER CHECK PRICE ON AMAZON
We may earn commission from purchases made from our links, at no additional cost to you.

Giving you one of the realest distorted tones ever, the MXR M104 Distortion+ is one pedal you must not miss out. Despite it being made out of germanium, which is apparently known to be the primary material for fuzz pedals, the M104 gives a very interesting range of tones.

In fact, this even made it go from giving your solos a heavy overdrive to muzzy distortions.

It has two knobs to control the output gain and distortion levels separately. The pedal also has footswitch toggles to further tune up the tone. Wanting to add a classic retro touch and vintage sounding distortion to your techniques? The MXR M104 has got you covered. 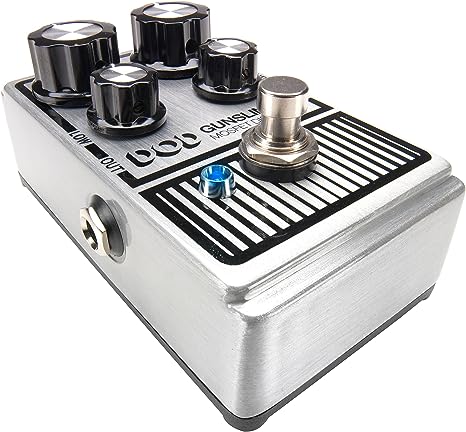 Digitech DOD-GUNSLINGER MOSFET
4.2
CHECK PRICE ON SWEETWATER CHECK PRICE ON AMAZON
We may earn commission from purchases made from our links, at no additional cost to you.

Giving you a tube-inspired distortion all from a compact little box, the DOD Gunslinger MOSFET Distortion Pedal is rich in both dynamics and harmonics.

The pedal reacts to your playing dynamics, making louder notes grittier while keeping lighter ones more intact. Thanks to the 2-band EQ, you can modify your solos and sound to your liking.

This pedalboard-friendly and compact pedal features the usual gain and level controls, but you can also adjust the lower and higher frequencies separately with two other smaller knobs. You also have the liberty to run it at 9 or 18 volts, depending on the volume you want or power supply you have.

Factors to Consider When Buying a Distortion Pedal

To achieve that pleasing crunch to your tone, you don’t just go up straight to your local store. The safest thing to do first is to know the basics in buying a distortion pedal. Below are some of the factors to consider.

There are many types of distortion according to its sound. “Distortion” usually means harmonic distortion, which is the addition of overtones to a signal caused by clipping in an electrical circuit.

It is commonly referred to as an arrangement of multiple overdrives running on different filters to produce an intense tone suitable for rock and metal.

The type of distortion you need might depend on how you use it and what type of music you’re usually playing. According to Music Radar, there are 9 common types of distortion and each vary on how they are used.

Aside from gains, you should also consider a pedal that has filtering effects. This includes wah-wah effects, equalizers, and pitch shifters, among others.

While gain-staging effects produce harmonic complexities to your solos, a good filter effect can neutralize it with frequency effects. Since we’re talking about distortions, things will more likely be messy. GuitarLessons states that pedals with adjustable filters or equalizers allows you to control and sculpt your tone to your liking.

Pro Co RAT2 Distortion Pedal
4.7
CHECK PRICE ON SWEETWATER CHECK PRICE ON AMAZON
We may earn commission from purchases made from our links, at no additional cost to you.

Possessing the classic RAT distortion tones but more revolutionary features Pro Co released a newer face to the collection—RAT2. Boost your performances with its soaring leads and rock rhythm tones.

The Pro Co RAT2 will definitely tick all the right boxes with its versatility and outstanding features. Even though its primary use is to produce distortion, the RAT2 does a great job in producing rhythm tones, soaring leads, and sparkly clean to warm overdrives.

10 Best Grunge Bands of All Time

A Guide to Different Guitars and the Genres They Fit

What Happened to LMFAO? The Iconic Duo Behind Party Rock Anthem

Focusrite Scarlett Review: Why Is It The Best-Selling Interface in 2021?

A great way to expand the sounds on your guitar is using a pedal or two.  This is how Jimi Hendrix managed to play...
Read more

Guitarists often doubt whether they need effects pedals or not, but a lot of the professionals know that pedals don’t instantly make you play...
Read more

If you play the electric guitar, you're more than familiar with the varying levels of gain (aka distortion or overdrive) that a player can...
Read more

How To Build Your Board: Will 2021 Be The Year Of Versatile Effects Pedals?

As I started to sort out my review calendar for 2021 one thing became glaringly clear: people want pedal reviews and they want pedals...
Read more

Choosing a good looper pedal from the stream of the same instruments in the market is very hard. How much more if you want to...
Read more

Considering getting one of the best tremolo pedals? You might be having a hard time selecting from all the options available out there. While many...
Read more
GUITAR JUNKYMore Than Just Guitars, We Are Music
Facebook
Instagram
Linkedin
Twitter