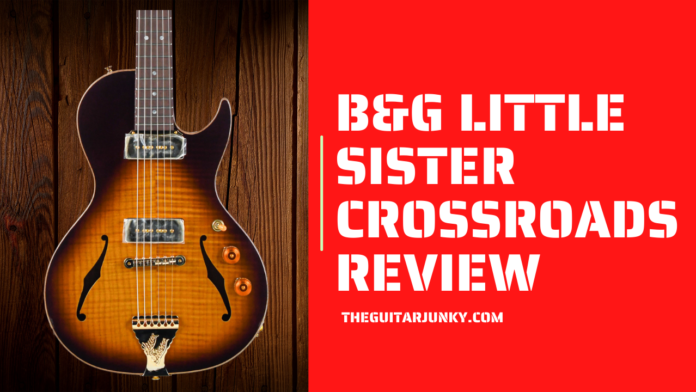 Quick Review: A fresh take on a vintage look: that’s what I think B&G is trying to achieve with their Little Sister Crossroads electric guitar. It’s surprisingly lightweight, yet packs a lot of sustain. The slotted headstock brings in extra response and less tension on the strings. Also, the Solid Maple Figured top wood on a midnight ocean finish is definitely a looker.

Custom guitars are expensive, they truly are, and let’s state that as a fact as early as now.

What makes it expensive, you ask? Well, these guitars are carefully crafted using old-school guitar-making techniques, and built at the highest quality possible. Attention to detail is crucial, and each guitar is built accurately, taking a very close look at each tiny little feature.

The guitar-making process is so intricate that certain companies limit production of these guitars to few selected units per month only.

But the finished product is a fine, sleek, accurate and well-crafted instrument, you almost don’t want it played and instead have it cased in a glass box for display purposes.

And this is what B&G Guitars have done with their Little Sister Guitars when they started out. Customers loved these guitars(I mean, who wouldn’t?).

But then there lies the problem with most custom guitars, which I have said earlier. It’s expensive, and most players can’t afford this luxury.

So the company looked into outsourcing the build for the model, to lower the costs of production, offer it at an affordable price tag, and making it affordable to most players.

Some specifications needed to be changed a bit, and yes, there maybe some compromises, but their tone commitment and high-quality standard remains the same.

And the result is the Little Sister Crossroads, and that’s what we are going to take a look for a review today. Given the change in production process, you maybe wondering if still holds the quality it should have.

Editor’s Note: This is not a sponsored review. This is written per the author’s sole opinion, with no influence from the company itself.

First off, let’s talk about the body construction of this guitar. The UV-Cured Poly finished B and G guitar has a body thickness of 1.75 inches, body length of 17.7 inches and body width of 13 inches, which are a standard among top quality guitars.

Its back wood is made of African mahogany, while its top wood is solid figured maple. I must say though that it’s slightly less flame leaving that grain interest. This element also keeps the top from looking boring and bland versus other guitars has.

The Crossroads’ natural edge, on the other hand, looks thicker while the color on the guitar’s top face is more scraped away with a little edge radius adding a bit more interest.

However, the pearloid inlays(which is a common design on most guitars) looks a bit pale. I would have expected a different inlay pattern, but then, I think it would defeat the purpose of keeping that overall vintage parlor guitar design.

The Crossroads has a one-piece quarter sawn neck although it has a square-topped and an acoustic style slotted headstock.

I interviewed Avi Goldfinger, B&G’s CEO, and here’s what he has to say about the headstock design.

“The inspiration for the Little Sister came from a pre-war acoustic guitar collection owed by David Weizman, the guitar designer. The headstock is a direct reference to the guitars from that era.”

Not to mention as an added feature, its body is a 3-piece spread but is well hollowed and jointed. This design allows a center block just under the guitar’s bridge.

For the hardware, it’s noticeable for its solid brass that goes the same for its pickup covers.  So aesthetics wise, B&G did a great job, not mentioning they added the proprietary delta tuners and D’Addario 0.10-0.46 strings for a total package guitar.

The Little Sister’s Crossroads Standard Guitar encapsulates a unique style while also being lightweight for that added comfort.

The total weight is 6.4 to 7.5 lbs.(2.9 to 3.4 kgs.) for this particular cutaway style. And yeah, I really want to emphasize that it’s surprisingly lightweight.

If you want an old school feel in a guitar, this Little Sister have a Gibson-style scale length along with a cutaway outline. It reminds me of a parlor style guitar although it’s somehow similar to a slab style body.

On the other hand, its bridge is on the body measuring 163 millimeter from the center of the tune-o-matic bridge to the guitar’s base.

Speaking of the tune-o-matic, it is gold-plated along with the pickup covers. It also has a less fancy jack plate and tailpiece that appears like lacquered brass.  It also has three-on-a-strip tuners that somehow resemble an old brass.

Upon testing, The Little Sister Crossroads feels like the best-sustaining and easiest playing parlor there is. But there is more it offers.

Its pickups take the acoustic tone and run them into powerful overdrive along with enough harmonic bloom, full tonal contrast between the three positions and impressive definition.  But despite being wax-potted, they’re a bit microphonic.

The neck of this guitar is rounder, fuller and woodier while its bridge growls and quacks. Its semi-solid tonal qualities are obvious in the middle settings and neck.  And even if it sustains as a solid body, its tone fullness is impressive.

Action is really low, so comfort is there.

Amazing enough, the strings still stay in tune even after hours of playing.  It is not also hard to move from one fret to another, and there’s never a doubt.

At its unplugged tone, its tonality resembles a great ES-335; however, it has more bass and sparkle definition due to the low middle range woodiness.

Plugging it in, the guitar brings out that vintage vibe, although I recognize that some guitarists would miss the separate pickup controls that make a different usable voice.

The Little Sister guitar also seems to have pulled back the solid body sting due to its semi solid nature. That’s a good thing if you’re after a more center blocked, softer and ES style voice that has plenty of snap and width.

I think some of you would feel a bit off with the 14-fret neck that feels a bit compromised, but maybe not, because, well doesn’t matter to me since my fingers really had fun travelling from low to high notes.

The one I have right now comes with a P90 pickups. And with it, there’s an improve sustain, clarity and touch sensitivity as you raise the pickups that are positioned lower initially.

Nevertheless, the mid setting offers plenty of character, although might be lacking horn-like bark from its neck and harmonic vintage from its bridge.

For semi-driven picking and warmer clean, its tone is superb, however. But then, it can be less exciting if you’d want to use a rock star guitar. But summing this section up, the Little Sister Crossroad guitar is a promising instrument for the guitar junkie in all of us.

B&G came back big time with the Little Sister Crossroads and regained its global popularity.  Coming $1,499(price includes a soft case and wordwide shipping), it is definitely worth its price tag for its superb and unbeatable sound and workmanship.

“Personally, I think the value for money can’t be beaten. This guitar competes with American-made guitars that sell for almost twice the price,” according to Avi.

Not to forget, this electric guitar with midnight ocean finish is stylish, sleek and on the versatile side of things.  It’s easy to play and offers great sustaining parlor.

Overall, the Little Sister Crossroads Electric Guitar is a thumbs-up for us. You might want to check it out yourself if you’re looking for a durable and elegantly finished electric guitar from B&G.

<b>Quick Review</b> <p>It is definitely not your typical guitar or just another shade version of a Strat or Les Paul! There’s more to it than meets the eye. It’s a refreshing change from the brand that’s able to pull it off excellently in terms of tone quality and sound performance in an exciting new package.</p>B&G Little Sister Crossroads Review
GUITAR JUNKYMore Than Just Guitars, We Are Music
Facebook
Instagram
Linkedin
Twitter