Alesis V49 USB MIDI Keyboard Controller
4.5
CHECK PRICE ON SWEETWATER CHECK PRICE ON GUITAR CENTER
We may earn commission from purchases made from our links, at no additional cost to you.

Alesis has been known for years to produce quality products at an affordable price. With the use of the latest technology, they create USB MIDI keyboard controllers that appeal to music producers for studio use. And, the full-sized 49-key Alesis V49 is among them.

The V49 isn’t designed to give you piano-like experience, rather, it offers more versatility than a real piano. It has tons of controls and functionalities onboard that are not found in a piano.

I’m going to discuss more about the Alesis V49. I couldn’t explain everything, but, at least, you’ll get a glimpse of how this midi keyboard performs.

Alesis V49 is a good-looking keyboard controller with blue backlit pads/buttons. It’s a compact long controller with all the controls to the left and the 49-note synth-action keyboard to the right. It’s a simple instrument with no fancy adornments onboard.

Some people find it portable with its 37.6-inch length and 9.6-inch width. It’s narrower than its competitors and it’s also lightweight as it weighs only under 10lbs. Aside from its portability, it also doesn’t take up too much space in your desk or your gig bag. 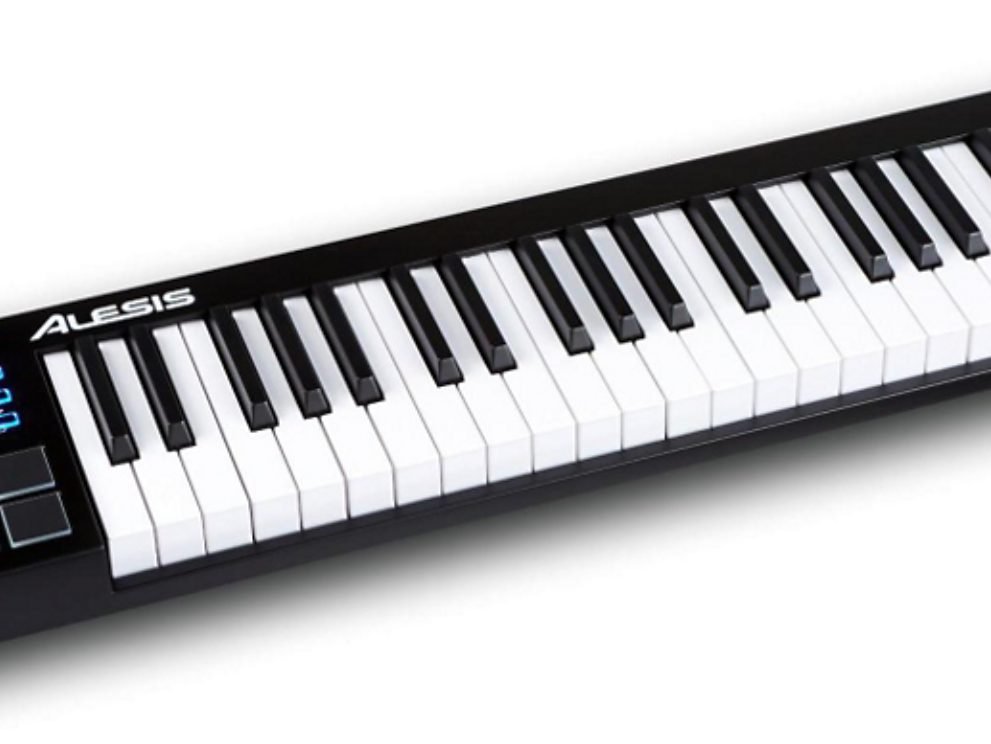 Yes, most controller keyboards are made of plastic, given that it’s designed to be used anywhere, Alesis V49 is made of high-density plastic. The keys are securely in place as well, so, you can hit them a bit harder (not too hard), and nothing comes loose.

Like most keyboard controllers, you’ll have the pitch-bend and modulation wheels to send MIDI Pitch bend information and continuous controller data, respectively. Then, you have the Octave Up and Down buttons, which allow you to shift the keyboard range up and down, respectively.

Above the octave buttons are four assignable buttons, which default function is toggle (latching) buttons. These buttons also let you send MIDI CC messages to your DAW software, with a proper setting.

You’ll also have four assignable 270º knobs that let you increase/decrease volume, change panning, etc. These knobs are primarily used for utilitarian purposes, which can also be repurposed to send MIDI CC messages like the buttons.

Lastly, the drum pads. The eight backlit pads are both velocity and pressure-sensitive. For me, the size is perfect for finger drumming. Although sometimes they don’t have the responsiveness you’ll need, but, workable.

You can’t find the On/Off switch/button on V49. Plugging in the USB cable to your computer automatically turns the instrument on. You’ll know it’s up with the blue LED light that illuminates on the buttons, pads, knobs and the wheels.

You don’t get sophisticated faders, rotary encoders or tactile buttons. However, you’ll get reliable and responsive buttons, wheels and knobs. The entire control panel is on the left, so it’s more accessible with your left hand. While it saves much of the space, it limits the utility of the pads and buttons. However, I understand that the focus of this device is the keyboard. 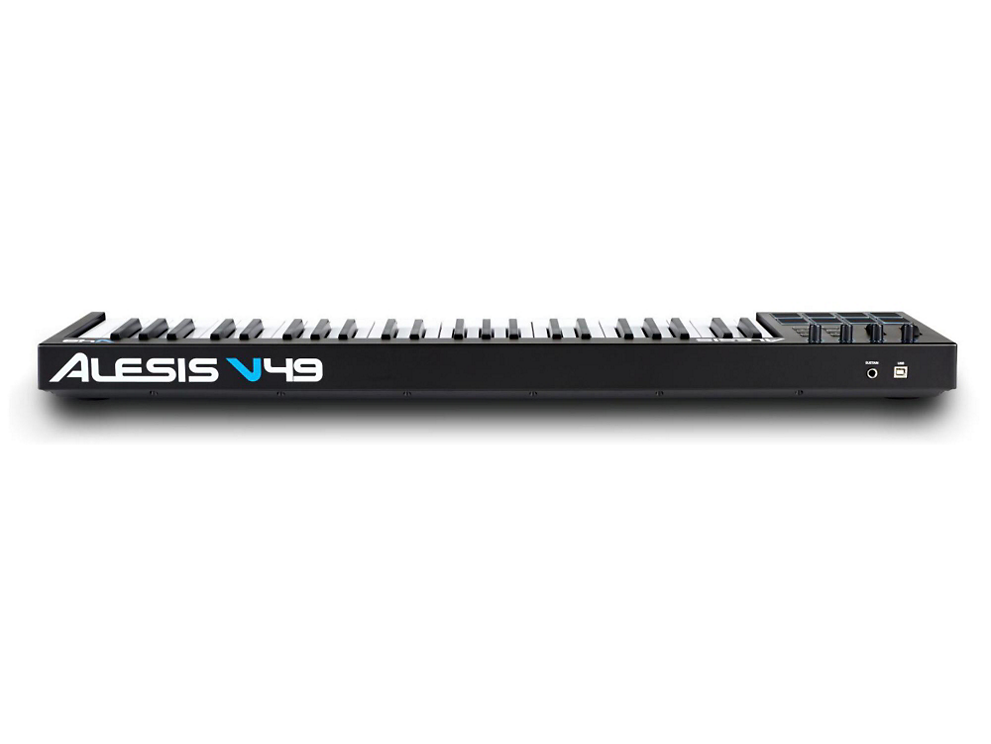 Not much connectivity, you only get a sustain port and a USB port. The former lets you connect ¼-inch TS sustain pedal, while the latter connects to your computer and gives ample power to V49. At the same time, it’s also used to send/receive MIDI data.

If you’re expecting to play it like a real piano, this one doesn’t have built-in speakers, nor does it have a headphone jack. It’s primarily designed to be connected to a computer and for music production.

Since the connectivity is straightforward, DAW integration is also easy. It works well with Ableton Live or the V49 Editor, which is available both for Mac and Windows PC. The V49 Editor helps you change the key mappings and adjust its sensitivity for better integration with your software.

Playing the keyboard controller is simple and straightforward. Don’t think of the complicated controls and assigned functionalities like the Nektar Impact LX88+. Just keep your head down to your V49 and start hitting the keys or tapping the drum pads. That’s how I did it, after all, this is a cheap keyboard controller.

I started with the 49-note keyboard since it’s the highlight of this controller. The keys are velocity-sensitive synth-action, full-sized keys, which are thick and accommodate fat fingers. With the V49 Editor, you can adjust the velocity sensitivity of the keys. 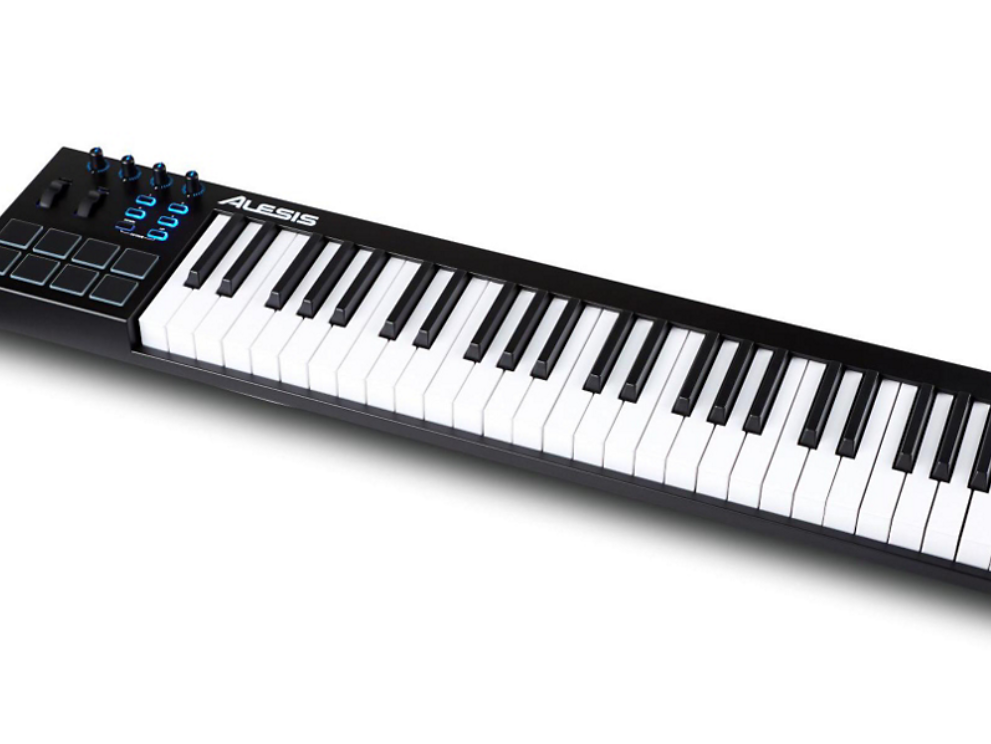 Looking closer and playing the keys longer make it uncomfortable for my hands. The flat-edge design doesn’t have the conventional “spring-up” at the lower end of the keyboard. But, if you don’t have plans to stick around the keyboard controller longer, this is just perfect.

Let’s go to the drum pads. Still, the eight pads are both velocity and pressure-sensitive. As I mentioned, I like the size, but, sometimes disappointed by their inconsistent responsiveness. Besides, these are also used to launch clips and samples.

Not much is being said about the sound department of the keyboard controllers because it varies with the software and computer application being used. However, Alesis V49 is released with Xpand!2, a premier program of the German-based company Air Music Technology. Xpand!2 is a powerful virtual instrument with a collection of over 2000 studio-grade sounds.

Aside from the sounds onboard in the software you’re using, Xpand!2 expands your options. This recording software gives you the right tool so you can start creating, recording and sharing your music easily. Producers, artists, and songwriters are given virtually unlimited tonal options, which are also tailored for ProTools

I know that this isn’t the best keyboard controller out there. In fact, it’s limited and lacking some controls. Though Alesis makes the V49 a keyboard-focused device, you don’t get the best keys or the best action from its 49-note velocity-sensitive keyboard.

I also can’t say that it’s better than the rest, because performance-wise it’s inconsistent. Though it’s better for the most time, this is not reliable when you perform live. However, if you are looking for a backup keyboard controller or a practice instrument, this one got your back.

Alesis V49 USB MIDI Keyboard Controller
4.5
CHECK PRICE ON SWEETWATER CHECK PRICE ON GUITAR CENTER
We may earn commission from purchases made from our links, at no additional cost to you.

If you’re looking for a keyboard controller that lets you make music easily without any hassle, the Alesis V49 fits your style. It’s a keyboard-centered device with a few usable buttons and knobs onboard.

The keys themselves, aren’t perfect, but they’ll help you play chords. The drum pads are good enough to produce drum beats. If you’re just getting started in your music production, you may begin with this affordable keyboard controller.

This isn’t the fanciest keyboard controller, nor gives the best performance you can have. But, guaranteed, you can make music quick and easy, with faster integration into your DAW software.

Guitar vs Piano – Differences, and Which is Better to Learn?